MOLINE, Michigan (USA) -- When Buddhist monk Thomas Nguyen moved into a brick ranch house on a 5-acre lot outside this Allegan County village last year, it seemed an ideal place to host Buddhist meditations and celebrations. 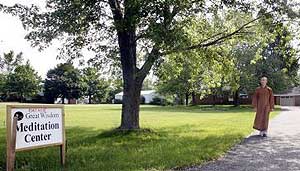 << Press Photo/Jon M. Brouwer
Buddhist monk Thomas Nguyen walks along his driveway on the five acres he owns near Moline.

Nguyen, known as "Thai Tue" to his followers, converted the two-stall garage into a meditation room and invited followers to his "Great Wisdom Meditation Center" for Saturday and Sunday gatherings.

He did not count on a visit from Leighton Township Supervisor Spencer Moore, who charged Nguyen with a zoning violation earlier this month.

Moore, who also enforces the township's zoning code, ordered Nguyen to stop hosting large gatherings until he gets a special-use permit to operate a church.

The township's zoning ordinance doesn't allow churches in agricultural zones, Moore said. Aside from Moline and a cluster of cottages around Green Lake, Leighton Township is mostly rural. Nearly 98 percent of its 3,652 residents are white, according to 2000 Census data.

"The main concern is for the safety of the people who are at his facility," said Moore, a Republican candidate for the state House of Representatives.

Moore said Nguyen and his followers can gather in small groups, but he cannot host large gatherings that fill his yard with dozens of cars.

Nguyen's three-bedroom house isn't set up for public gatherings, he said. "Good Lord, if there was a fire over there, they're going to sue the township."

Moore's first two visits to Nguyen's house and the zoning code violation raised the hackles of his followers, most of whom are nonresidents who drive in from Grand Rapids and Holland.

"What baffles me is why you would pursue this course of action against an obviously gentle, harmless soul who is just trying to practice his religion," said Marc Freed, a Grand Rapids resident and retired California lawyer advising Nguyen.

Freed argues that Nguyen's followers create few traffic problems compared to the mobile home park whose entrance is across the street from the house.

After a recent meeting with Moore, Freed said he and Nguyen's lawyer plans to meet with township officials to determine what needs to be done to get a special-use permit.

While Nguyen is willing to abide by the township zoning code, Freed said he's hoping a federal law enacted in 2000 will convince township officials to give him the special-use permit Nguyen will need to operate.

The Religious Land Use and Institutionalized Persons Act prevents local zoning officials from discriminating against or burdening religious groups.

Using the law, a group of Tibetan Buddhists in Miami recently won the right to gather at a home at the end of a cul-de-sac. City officials had cited parking and traffic problems when they denied the group a permit to gather.

In Ottawa County, a similar dispute in 2006 resulted in $50 fines for seven leaders of a Buddhist temple who held services in an Olive Township home in violation of the township's zoning ordinance.

The confrontation in Moline began last March, when Moore stopped by the house with an sheriff's deputy on a Saturday morning and warned Nguyen to stop hosting his meetings.

Moore stopped by again on May 27 and told Nguyen he was breaking the law as followers were pulling into his driveway and parking in his backyard. Moore said he counted more than 20 cars in the yard.

"He thought he was going to be arrested and hauled off to jail," he said.

Nguyen, a Vietnamese immigrant who is 5-foot-6 tall, said he was intimidated by Moore, who taller than 6 feet.

Moore denies he was attempting to intimidate Nguyen. He said the monk began "shrieking" at him during the visit.

Except for three Buddhist holidays a year, Nguyen said he rarely has more than three to five vehicles at his house on Saturdays, when he hosts meditations for Westerners.

Nguyen said he typically gets eight to ten cars on Sundays, when he hosts meditations for Vietnamese followers. He said they were celebrating Buddha's birthday when Moore stopped by on May 27.

"They had an accident in front of that place because there was so much traffic," he said.

According to state police records, the accident occured on Jan. 27 when a 20-year-old Wayland resident rear-ended one of Nguyen's followers whose car was stopped on Division Avenue while waiting to turn left into his driveway.

State police officers who investigated the 10:45 a.m. accident ticketed the Wayland resident for driving too fast for conditions on the icy road.