Chicago, USA -- It took nearly 60 years for Judy Franklin to figure out that the key to riding the nation's economic roller coaster was to detach from it and observe as if from afar. 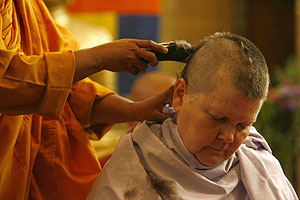 Now, as those around her fret about finances, the divorced mother of two rests assured that it is not the end of the world, a perspective she acquired when she became the Midwest's first woman ordained as a nun in one of the earliest Buddhist doctrines alive today.

Franklin and about a dozen American women are trying to revive the lineage of an ascetic way of life that started during the Buddha's lifetime but disappeared in Sri Lanka 11 centuries ago. Reopening one more avenue of devotion for Buddhist women is essential to curbing violence and loosening the devotion to wealth in today's world, Franklin says.

"I'm just a regular person," said Franklin, 59, of Elkhorn, Wis. "It's about making the teachings more accessible to Americans."

Last year, inside the Congregational Unitarian Church of Woodstock, Franklin took the 10 vows of a novice nun and began preparing to take the 311 precepts required to be fully ordained—a path that could take years.

In many ways, adopting ancient monastic rules was a way for Franklin to reclaim her life as her own. Hours after her head was shaved and she donned the maroon robes of a monastic, she took her son, Stephen, to college. Her daughter, Kate, also is away at college.

Without the option of a convent, Franklin converted her new empty nest into a sacred space. She sold her house in Williams Bay and bought a much smaller condominium in nearby Elkhorn. The coffee table in her living room became an altar, complete with a statue of Buddha and candles.

In the room she sits motionless, meditating for hours, a practice that might seem selfish to some. But only then can she calm her mind and see what she should do for herself and others.

"That issue of selfishness is a real stumbling block. Americans tend to think we've got a lot, so we need to be helping people," she said. "The essential spiritual teaching is that you can't give love and kindness unless you experience it yourself. You can't give something you don't have." 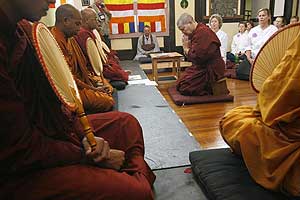 Judy Franklin bows as she becomes a Buddhist nun during a ceremony at the Congregational Unitarian Church in Woodstock. She was given the name Vimala, (pronounced WEEm'la). In Pali, the name translates to "no rust," or clarity  >>

Once you have it, you can radiate it, she said.

All her life, Franklin has been devoted to the quest for truth. Her circuitous journey has led her through churches, newsrooms, marriage, motherhood, divorce and cancer. She knew she had reached her destination when she attended a Tibetan Buddhist retreat 13 years ago.

Raised a fundamentalist Christian in Houston, she renounced organized religion at age 17. Instead, life became one experiment in truth after the next. After college, she moved to California, where she met her first husband and encountered Eckankar, a small religious movement founded in 1965 by author Paul Twitchell. Central to Eckankar's teaching is the belief that the soul can leave the body at will.

Suspicious about the organization's leadership, Franklin separated from it about the same time she separated from her first husband. She moved to Japan to teach English and first encountered Buddhism, though it held no appeal.

Shortly after returning to the U.S., she moved to Wisconsin, where she worked as a book editor, met her second husband and had two children. She also joined and taught Sunday school at the local United Church of Christ. She appreciated the church's view of God as love, not the angry Almighty she'd known as a child.

"That healed me from a lot of bitterness and rejection of Christianity," she said.

But her inability to turn to God as a source of strength when she was diagnosed with breast cancer in 1994 convinced her that she was not a Christian. Her prayers felt hollow, she said.

The following year, she attended the Tibetan Buddhist retreat in Milwaukee and took vows as a practitioner within days. She continued to drive the distance for eight years. Meditation opened her eyes to the sad reality that her 12-year marriage had to end.

Franklin credits her fundamentalist background to drawing her toward Theravada teachings. But it was the teaching of Theravada Buddhism that there are 84,000 truths in the universe that appealed to her most of all. Buddhism being only one truth.

The teachings also helped her as her two children grew more independent. But motherhood was the one commitment that gave Franklin pause before becoming a nun.

"I know this is the right path," she said. "But that's a responsibility I'd taken on in this life, and probably the one responsibility I would absolutely never waver from. I wanted to become a nun, but I didn't want to abandon that most precious thing to me."

She consulted her teacher, Sujatha Bhante of Crystal Lake, who explained that motherhood was no obstacle. In fact, the first Buddhist nun was the woman who had raised the Buddha himself.

"He said: 'You won't love your children any less. You'll just love the rest of the world more,' " she said. "I thought, 'I can do this because my children taught me how to love unconditionally.' "

Bhante said she had the concentration and courage needed to wear the robes and live up to the responsibility. She also put a Western face on the tradition that he believed would raise the appeal.

"Because 1,000 eyes are looking at us, I really want to give this teaching to this culture," he said.

Living up to the commitment has been more difficult than Franklin thought. Months after adjusting to her sacred solitude, her son returned home. Living with someone who doesn't adhere to the same regimen has presented unforeseen challenges to Franklin's routine, dietary vows and renunciation of entertainment such as TV.

She says the path forward has never been so clear.

At ordination, Bhante named her Vimala, or clarity.