Yellow Springs, Ohio (USA) -- The Buddhist Studies Program of Antioch Education Abroad, or AEA, offers something unique to young people, organizers believe. The young participants not only study Buddhism but live it, immersed in an exotic world as residents of a monastery among monks and nuns. 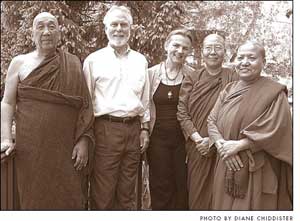 << The Antioch Education Abroad Buddhist Studies program celebrates its 30th anniversary this weekend with a reunion of students and faculty. Shown above are, from left, Sayadaw U Nyaneinda, abbot of the monastery in Bodh Gaya, India, which provides housing for AEA students; Robert Pryor, program director since the program’s beginning; Dianeah Wanicek; Sister Dharmavijaya and Sister Molini, also of Bodh Gaya.

“The program emphasizes both study and practice,” according to program director Robert Pryor, who in a recent interview said the AEA blend of experience and intellectual query reflects “an Antiochian perspective” on learning.

The program’s uniqueness in the world of international study has served it well. This weekend, the Buddhist Studies program celebrates its 30th anniversary with a reunion in Yellow Springs. From 30 to 50 past participants in the program are expected to attend, according to Pryor, and the event also honors Sayadaw U Nyaneinda, the abbot of the monastary in Bodh Gaya, India, where the program is based, along with Al Denman, Antioch College professor emeritus of religious studies who helped launch the program. Sister Molini and Sister Dharmavijaya of the monastery will also be present.

The public is invited to take part in the celebration on Sunday, May 24, by attending a showing of Amongst White Clouds, at 3 p.m. at the Little Art Theatre. The film, made by a former participant in the program, looks at the hermit monks who live in the mountains of China.

What has kept the program alive for three decades is the sustained interest of young people, according to Pryor, who has directed the program since its beginning.

“The students wanted this,” he said. “What we offer hit a chord with them, and they tell their friends and professors. Many philosophy and religious students want to live in a monastery and still have an academic program. We do both.”

Nobody claims the program is easy. Rather, participants have to rise each morning at 5 a.m. for meditation, and also to follow strict Buddhist precepts that guide behavior. Students take classes in Buddhist philosophy, history and culture, and can study introductory Hindi or Tibetan.

They live in a monastery in Bodh Gaya, a small northern town in India that was the birthplace of Buddhism. As such, the town is a destination for Buddhist pilgrams the world over, and that infusion offers a rich cultural experience, according to Pryor. During the four-month term, students study Zen, Vipassana and Tibetan Buddhism, and practice meditation twice a day. They may also choose to live as a monk or nun for a week.

A former participant, Rebecca Kushing, described the AEA program as “the deepest immersion you can have in Buddhism without drowning.”

The program would never have happened without the support of the abbot, who is now the senior abbot of the 35–40 monasteries in Bodh Gaya and as such, the one sought after to give advice, Pryor said. When Pryor approached the abbot three decades ago to ask his permission to have university students live in the monastery, the abbot thought for only a moment before responding, “Yes, every monastery should have a school.”

A masters degree graduate from Antioch University in Putney, Vt., Pryor in 1979 conceived of the Buddhist studies program after his own experience traveling to Asia to learn about Buddhism and meditation. He wanted to offer a similar experience to young people, Pryor said, and he found a receptive audience when he approached AEA leaders.

“Other schools wouldn’t have said yes, because they don’t value experience as a learning tool,” Pryor said. The new program also benefitted from support from Denman, who Pryor described as being “open and enthusiastic” about the idea.

Since that time, about 30 students a year have taken part in the Bodh Gaya program, which takes place from August to December. According to Pryor, some students have gone on to become lifelong Buddhist practitioners, while for others, the experience was a stage in their personal growth.

“For everyone, it helps them to understand what Buddhism is about,” he said.

The Buddhist Studies program is an intense experience for both students and Pryor, who lives and works with the students, serving as teacher, parent, confidante, registrar and dean of students, among other roles.

“It takes a special type of person to do this well and for so many years,” said Andrzej Bloch, the dean of International Education for Antioch University, speaking of Pryor.

His is a wonderful job, Pryor said. He continually learns from his students, from the living experience at Bodh Gaya and from the other AEA instructors, and for that he feels grateful.

“For an educator, it’s an ideal environment,” he said.

Yellow Springs has felt the impact of the Buddhist program in the creation and continued operation of the Yellow Springs Dharma Center. The idea crystallized when Antioch College students returned from India and wanted a place to continue their meditation practice, according to Pryor, who, along with other local Buddhist practitioners, worked together to first open the center and eventually to purchase its Davis Street site. The united effort is a good example of town/gown collaboration, he said.

The Buddhist Studies program is one of several study-abroad programs offered by AEA, which is one of the oldest international study programs in the country. Originally called AEA and begun just for Antioch College students in the mid-1950s, the program in the 1970s became Antioch International and separated from the college, Bloch said. At that point, it began to focus on attracting students from other colleges and universities, and only about 10–15 percent of its 120 yearly participants came from Antioch. It remained separate until the early 1990s, when former Antioch University Provost Al Guskin brought the program back to Antioch College. The program is now a part of the Antioch University structure, and still attracts the bulk of its participants from other schools.

Current AEA programs are Brazilian Ecosystems, Immersion in German Life and Culture, Europe in Transition, Comparative Women’s and Gender Studies in Europe, Arts and Culture in Mali, West Africa, and a Buddhist Studies program in Japan. This fall, the AEA hopes to launch a third Buddhist Studies program, to take place in China. For more information, go online to aea.antioch.edu.

All of the AEA programs share an emphasis on academic excellence, according to Bloch, and most also have a significant experiential component. For instance, the Mali program houses students with local artisans, and the students, along with studying African arts and culture, hold artistic apprenticeships.

The 2008 closing of Antioch College has created some confusion around the status of AEA, both men said, but the program, as part of Antioch University, has continued without interruption. The college closure did not have an immediate effect on AEA enrollment, since most participants come from other colleges, and some former Antioch College students took part this year. However, the recession has had some effect on enrollment, which has declined by about 12 percent for next year, according to Bloch.

But the program is holding steady, both men say, and now faces the twin challenges of strengthening itself as an independent program, and being ready if and when Antioch College is revived.

“We want to be ready when the college comes back to serve the college,” Pryor said.