Deep in the heartland of America, learning about Eastern philosophies may be easier than expected.

Nebraska, USA -- Since the 1990s, a variety of groups have formed in Lincoln to give Midwesterners places to learn about Buddhist teachings. They include Jewel Heart - a Tibetan Buddhist chapter - Lotus Zen Temple and Linh Quang Buddhist Center. 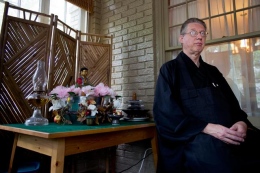 Fajiàn Michael Melchizedek, from Germany, moved to Lincoln in 1986 to be a minister at a Greek Orthodox Church.

When Melchizedek first arrived, he was involved in the Lincoln Interfaith Council that accepted non-Christian faiths.

“Nobody ever could find any Buddhists to join because there just weren’t any,” he said. “Or, at least, they were very well hidden.”

After decades as a minister, Melchizedek wanted to do something for himself, and Buddhism always intrigued him.

“It was the openness and the idea of what Buddha stood for is more to my liking,” Melchizedek said.

Melchizedek retired from the church in 2007 and took a class about Zen Buddhism. Shortly after, he became a temple priest for the Lotus Zen Temple and he is now known by members of his Sangha, or Buddhist community, as Fajian Shakya.

He said his transition from Christianity to Zen Buddhism wasn’t a denial of the Christian faith, but an expansion of his beliefs. Jesus and Buddha taught similar lessons, Melchizedek said.

“They don’t exclude each other,” he said. “They complete each other, rather. So I see more of a synthesis of the two.”

Today he has about 15 to 20 students and he even uses Skype to hold face-to-face sessions with students who don’t live in Nebraska.

“These people would be stranded,” he said. “They’re living in areas where they cannot get to a Zen temple or a Zen meditation place.”

The Lotus Zen Temple currently has no official temple, but members are working to raise $2,000 for their own place. Melchizedek hopes it would give him space to teach Tai Chi.

In the early 1990s, Vietnamese families who had moved to Lincoln began meeting in a converted house known as the Linh Quang Buddhist Center, according to an April 2006 article in the Lincoln Journal Star.

Outside the red-roofed Linh Quang Buddhist Center are tall blue and yellow columns and dragon statues. Wind chimes jingle in the wind, swaying in front of circular windows that line the sides of the building. Inside, a large room is filled with padded benches that sit only a few inches off the ground.

They face an ornate display of a Buddha statue, filled with lotus flower decorations, bowls of oranges and incense. Above the Buddha statue, the ceiling is painted blue with white clouds to look like the sky.

Members meet in the basement of the A&E Inc. building. Along the back wall, a projector displays Rimpoche as he gives his weekly teaching. Strings of lights are the only thing illuminating the Tibetan prayer flags that hang from the ceiling.

After the Skype session, members talk about what they learned.

Rimpoche also visits Lincoln about once or twice every year to give lectures, said Don Mazour, a member of Jewel Heart since it first opened in 1991. Rimpoche’s next visit is Nov. 2 to Nov. 4.

Mazour said he heard about Jewel Heart through a radio advertisement. Other members discovered the group in similar ways: newspaper articles, advertisements for classes offered by Jewel Heart and announcements of Rimpoche lectures.

“There’s a seed that each individual came across,” said Roger Renken, a member of the group for about seven years. “Then that person, based upon their curiosity from that opportunity, continued to learn more.”

This trend seems common among people first learning about Buddhism.

For Emma Reid, a sophomore mathematics major, it was a world religion class in seventh grade that sparked her interest in Buddhism. She soon decided she wanted to be a Buddhist herself.

“At the time I didn’t really know what that meant,” Reid said. “As I’ve kind of grown, it really does fit with my belief system and my lifestyle.”

Ray Paul, a member of Jewel Heart, said Buddhism is all about “decreasing negativity, increasing positivity and controlling your own mind.”

“It’s just good values everyone should believe in, just put into a religion,” Reid said.

Reid does not attend any groups in Lincoln, but said she would be interested in joining someday. She plans to take one of the Buddhism courses offered at the University of Nebraska-Lincoln.

For people interested in Buddhism, Melchizedek said the best way to learn is to try it for yourself.

“How do you describe to someone how an apple tastes to someone who hasn’t had it before?” he said. “You have to experience it in order to know what it’s about.”