Kansas City, KS (USA) -- Lama Chuck Stanford of Stilwell founded Rime (“REE-me”) Buddhist Center, RimeCenter.org, with his wife, Mary, in 1995. Stanford is the organization’s executive and spiritual director. This conversation took place inside the worship center, which is in a historic church in the Crossroads Arts District. 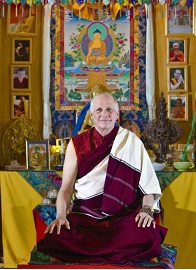 << Lama Chuck Stanford at Rime Buddhist Center in Kansas City, which he and his wife, Mary, founded in 1995.ALLISON LONG/The Kansas City Star

Do you wear the robe you have on today all the time or only when you come here?

Only when I am representing Buddhism — if I am giving a talk or for a service here.

So you don’t go to Costco dressed like this?

Well, only if I am on my way home from an event. Then I might. But jeans are more comfortable than wearing a dress.

What religious tradition were you raised in, and what made you switch to Buddhism?

I was raised a Christian. I left the Christian church as a teenager — it didn’t speak to me. For much of my young adult life I didn’t practice any religion.

My wife and I read some books on meditation many, many years ago, and we started practicing meditation. Not so much for spiritual reasons, more for health reasons.

Later we were in a yoga class and there was a group of Buddhists that were meeting in the same space, and I was asking about the cushions on the floor, and someone said, “They are for the Buddhists. They meditate.” And I thought, “Oh, I do that.” So I started staying and sitting with them and reading. And the more I studied, the more I found that the Buddhist world view really fit with my world view.

First there is great emphasis placed on compassion. The Dalai Lama says over and over: Be kind. Be compassionate. And if you can’t do that, at the very least, don’t harm others.

What was your inspiration for starting Rime Buddhist Center?

When I was first was exposed to Buddhism I was affiliated with a Buddhist center that had three hours of sitting on Sunday, from 9 a.m. until noon. You could come for all of it or part of it, but it was just sitting. There was no chanting, there was no talk, there was no music.

I wanted more of a service that Westerners could relate to, elements that would be familiar to people who were used to going to a church or a synagogue or a mosque. And I think it stays true to the Tibetan tradition of Buddhism.

What is the Tibetan tradition?

There are essentially three schools of Buddhism that exist today: Theravada; Mahayana, of which Zen is a subcategory; and Vajrayana, also known as the Tibetan tradition that is associated with the Dalai Lama.

In the hallway there is a picture of you standing next to the Dalai Lama. When did you meet him and what was that like?

My wife and I have met His Holiness several times. The first time by ourselves, and then we organized several group trips.

The first time meeting him in 1998 was very overwhelming. It was very brief. It’s not that you sit down with him or anything.

His assistant introduces him to you and that’s about it. But if you engage with him in any way, you notice that he is totally present in a way that is rare. Most people when you talk to them, they are partly present and partly in their own thoughts or thinking about what they are going to say next. When you talk to him you can tell he is not thinking about anything other than what you are saying and what he is saying to you and it is overwhelming.

What are all these boxes of juice and energy bars on the table for?

We started an outreach program for the homeless several years ago where we would fill backpacks with food and water and drive around looking for homeless people and hand them out.

Just this year we have taken over a different project started by another group where we fill plastic food storage bags with healthy nonperishable food and maybe socks or gloves if it’s cold. Every Sunday evening we drive a route around Kansas City — it takes about one hour — to places where I could not believe human beings were living the first time I saw them, underneath freeways and in decrepit structures. You pull up in the car and it appears deserted and then you honk and people start to emerge literally from the shadows.