Denver temple stays up to kick off year of ox 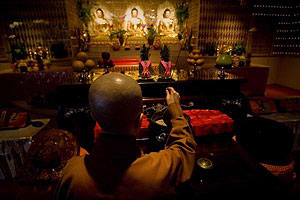 The Buddhist blessing was taped along each door at the Denver Buddhist Cultural Society and temple for Chinese New Year.

The 15-day celebration that began on Sunday is noted as the Chinese or lunar new year. Today marks the start of the year of the ox.

"We will have 200 to 300 people here tonight to pray," said Happy Hsu, an assistant at the temple. "Approximately 400 people will be here for the celebrations throughout the night."

The dinner is a hearty vegetarian dish called a "hot pot" cooked by the monks and volunteers at the temple. The free dinner began immediately after the prayer ceremony led by the master monk, Venerable Chueh Sheng.

"In the praying ceremony, we chant, sing, bow three times and pay respect as we invite the thousands of Buddhas to bless the new year, for world peace and a stable economy," she said.

The 15-year-old temple offered games and lucky draws, along with a traditional lion and dragon dances and other festivities scheduled to last past midnight to usher in the new year.

"Most people will stay through midnight because it is lucky to be among the first to offer incense," Hsu said.

The small, house-sized temple was decorated with red lanterns, orchids, other flowers, fruits and incense as offerings to honor the Buddhas.

Other traditional Chinese New Year's foods include sweet dumplings made of sesame or peanut, a year cake and candy platter that includes coconut, watermelon seeds, sesame and ginger sticks, which are all eaten for good luck.

The temple also planned to pass out the traditional "lai see," which is Cantonese for "little red envelope." Generally, money in even denominations is given to children, although the temple's red envelopes will have individual blessings in them instead.

Hsu said these are only some of the many traditions to celebrating the Chinese New Year, which vary among the eight sectors of Buddhism, with many more cultural and regional distinctions.

"We will see Buddhists, Americans, Asians, specifically the Vietnamese and Cantonese here," she said.

Nam Vuong of Aurora is of Vietnamese and Chinese heritage. The mother of four was among those crowding Asian specialty stores Sunday, doing some last-minute shopping.

"We always eat fish for prosperity at the big reunion dinner for New Year's Eve," said Vuong, who was born in 1961 and therefore an Ox by birth year. "It's a special year for me. Ox year comes once every 12 years."

Vuong said her traditions include head-to-toe new clothes and a rigorously clean house, both symbols of a new beginning.

She added: "When everyone is together, reunited, it's the most important tradition."