Tucson, AZ (USA) -- When Khenpo Dean Pielstick, the leader of the Awam Tibetan Buddhist Institute, began searching for other Buddhist groups in Tucson, he found at least 22. 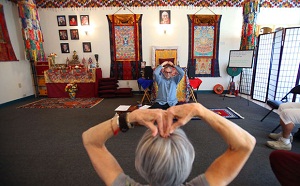 << Dean Pielstick, the kenpho of the Awam Tibetan Buddhist Institute, leads a Tibetan Yoga session at the group’s space. Pielstick wanted to change the fact that the local Buddhist organizations did not know much about one other.

On the newly launched tucsonbuddhism.net, Pielstick wants to create a resource and shared space for Tucson’s various Buddhist traditions. So far, he has listed organizations he has found and is contacting them to verify their information.

“I was aware that a lot of Buddhist organizations in town don’t know much about each other,” Pielstick said. “Part of the idea was sharing that information so that people within the religious community would know more about each other, but the other reason was to provide a place for people in the community or visitors to find information about a group.”

The Awam Tibetan Buddhist Institute, called the Dharmakirti College until 2012, has been around since 2000. But it wasn’t until November 2014 that the group got its own space, moving out of the Little Chapel of All Nations at the University of Arizona and into its current home at 3400 E. Speedway.

Pielstick estimated that in one week, the institute sees between 20 and 25 active participants. Among adults in Arizona, only 1 percent identify as Buddhist, according to the 2014 U.S. Religious Landscape Study by the Pew Research Center.

Since Pielstick moved to Tucson in 2003, he hasn’t seen much collaboration between the Buddhist communities here. An exception, he noted, was a day of meditation in Armory Park last spring, sponsored by Empty Mountain Sangha, a secular Zen Buddhist community.

Change Your Mind Day, this time co-sponsored by Empty Mountain Sangha and the Shambhala Meditation Center of Tucson, returns to Armory Park on Saturday, March 19. Since then, Boccio said he has seen an uptick in collaboration among traditions.

“There’s the idea that there’s a real variety in the expression of the dharma and teachings of Buddha,” Boccio said. “I think it helps to be aware of that from the beginning so there can be a respectful dialogue and acknowledgment of those differences.”

Pielstick hopes the online Tucson Buddhism Network can facilitate that sort of communication.

Jane Stanley, an active member at the Awam Tibetan Buddhist Institute, said understanding other teachings actually corresponds with the Rimé movement, a movement that encouraged the recognition of and respect for differences within the Tibetan Buddhist tradition.

The website is meant to be a 21st-century version of that, expanding to include other branches of Buddhism, as well.

“It’s something Buddhists should do,” Stanley said, calling this kind of study “a tradition within the Buddhist family.”

On practical level, the website provides a central space for groups and centers — especially smaller ones lacking their own website — to post the specifics of their traditions, schedules and locations.

Pielstick said, “It helps us understand better who is here and understand what they are doing and what is similar or different.”