'We are works in progress'

Sun Valley, Idaho (USA) -- According to professor Robert Thurman, a former Tibetan Buddhist monk and quintessential New Yorker, the gifts of Tibet boil down to one concept. It is that "bliss is possible." 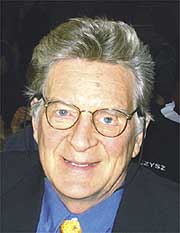 He began his lecture Thursday, April 6, at Our Lady of the Snows Catholic Church in Sun Valley by acknowledging his teacher, the Dalai Lama, who visited the Wood River Valley in September 2005.

"I'm conscious of being here in the wake of the Dalai Lama," he said. "He is the ultimate product of the Tibetans."

Thurman wound his way through the higher systems of Buddhist education, or Dharma, moved on to nirvana, hit on the Four Noble Truths and discussed the advantages of living a lifetime of learning before catching the audience up on the history of Tibet.

"Buddhism is partly a religion but not mainly. It is not a killjoy philosophy. Rather, Buddha proclaimed that every being will achieve ultimate freedom from suffering. Buddha said belief will not save you and in fact can be harmful. The only way to be safe from suffering is understanding, knowing about the nature of the world and ourselves."

The actor in Thurman takes over often.

"This might be annoying to some. 'What do you mean? You're going to take away my suffering? That's what makes my life meaningful,'" he mock whined. Appreciative laughter followed his many wry quips.

"The cause of suffering is ignorance, an active mis-knowing of something and the distorted idea that we're the center of the universe.

"You think the one thing you know is that you are you and you're here. And you think you're the main thing but no one else here agrees with you. They think they are the one. The only time someone agrees with you is when you're in love and that person thinks you are the one too."

Sponsored by the Sun Valley Center for the Arts as part of the "Art of Tibet" exhibition, the evening was part lecture, part stand-up routine, seemingly spontaneous, and very informed.

"What you are is a work in progress, a relative being that is part of your environment," Thurman said. "Therefore, the project of self-creation is to become more, be all that you can be. That is what Buddhism is.

"You want to know why the Buddha smiled? Nirvana, supposedly, is the nature of life, of what we have here now. It's because we don't understand that, that we're not blissful. Later, we look back and say that was the best day or those were the best times.

"So, I will enjoy this moment absolutely to the fullest, retroactively!"