Kaua'i, Hawaii (USA) -- For youngsters, the pouring of the sweet tea over the figure of the Buddha was the highlight Sunday, when more than 300 Buddhists from around the island celebrated Hanamatsuri. 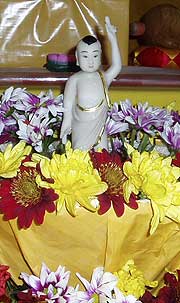 “It’s not very often that Hanamatsuri and Easter fall on the same day,” said Brian Yamamoto of the Kapa‘a Hongwanji Mission. “Last year I think the two events were a week apart, but this year it falls on the same day.”

Organizers of the islandwide event took that into consideration, setting up enough seats for about 300 people at the Kaua‘i Veterans Center.

Hosted by the Kaua‘i Buddhist Council, which consists of several different sects of Buddhist churches, the congregation melded together as notes from the combined West Kaua‘i Hongwanji singers and the Lihu‘e Hongwanji Mission choir opened the festivities in song.

Buddha was born on April 8 in Nepal about 2,600 years ago, Dr. Randy Hirokawa, Dean of the College of Arts & Sciences at the University of Hawai‘i, Hilo, said in his remarks.

The sweet tea that youngsters were drawn to symbolizes the gentle rain that was falling when the prince was born in Lumbini Gardens, which was in full bloom with spring flowers.

Lumbini Garden is symbolized by the hanamido which is decorated with flowers in which the figure of the Buddha stands, one hand pointing to the heavens, and one hand to earth.

Hirokawa said when the baby was born, he was predicted to become either a great king, or a great spiritual leader.

The baby’s father protected the baby in the hopes the child would grow to become a king, but on one day, the growing child experienced life.

That was a turning point for the young prince who, at 29, forsaked all his worldly goods and set out to seek a way of salvation for all the people who suffered from illness, poverty and spiritual dissatisfaction.

In Hawai‘i, Buddha Day, or Hanamatsuri, was officially recognized by the State Leigslature in 1963. From that time, the governor has proclaimed the first week of April of each year as Buddha Week in the state.

And, just as the rains fell in the kingdom of Kapilavastu 2,600 years ago, as the services progressed in Lihu‘e, a light mist blanketed the cars in the parking lot.

For more information on Buddhism, people may call any of the above churches.