Author to speak at Wellness Fest

Idaho, USA -- Robert Thurman says he can't wait to see the new Star Trek movie out this summer. As a leading scholar and translator of Tibetan Buddhism to Western audiences, he believes science fiction provides a likely metaphor to describe the "multi-dimensional universe of infinite possibility" inherent in the Tibetan Buddhist worldview. 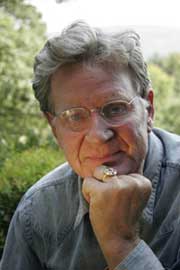 The following thoughts are excerpted from an interview with Thurman prior to his participation at the Sun Valley Wellness Festival on Friday, May 22, at 7:30 p.m. as keynote speaker with Michael Beckwith:

"Tibetan Buddhists have a quantum physics and astral physics world view. There is life on many other planets and enlightened beings all over the universe. There are also universes in every atom. The Western, materialist worldview has us on a cold and lonely planet, fearing invasions from aliens. Our scientists send Beatles songs out into the cosmos, hoping for a response from Alpha Centauri, or something.

"We are trapped in a failure of the imagination in America today because of the prevailing view of materialism. There are those who recoil from this materialism and go back into old-fashioned, Western fundamentalism, which is very closed and flat. The Earth is flat, like during the Inquisition. We are stuck in either of these two options.

"Buddhism helps to discover the best that is in our culture. In any culture—America, Mongolia, Japan, or Iran—as it did in ancient times, Buddhism seeks to grasp onto the elements of altruism and scientific wisdom, and we have those in abundance in our Western culture. Henry David Thoreau, Walt Whitman and Ralph Waldo Emerson had Buddhist sensibilities."

"Science in the West is valuable, especially when it doesn't settle for the dogma of materialism, but looks very carefully at the atoms and the subatomic energies, when it gets down to that you can't really pinpoint what reality is. You have to implant your mind as a part of nature, and your observation affects what you observe. There is no such thing as absolute reality. You have to program in the presence of your subjectivity. You are responsible for your presence in the universe. That is ancient Buddhist science and it is modern quantum physics.

"The Buddha discovered that if you look at the nature of reality carefully and analyze it, and study it scientifically, although the scientific instrument he used was an extremely focused and laser-like mind that could really concentrate and drill down to the deeper nature of things; when you do that, you find that the nature of things is fine. It's wonderful. The energy of the universe is abundant. It's blissful, not harmful. You don't have to be afraid of other people. You don't have to fight with the universe. You could say this is the 'good news' from Buddhism."

"In all forms of Buddhism there are three traditional kinds of wisdom: one formed of learning through books, one born of critical reflection and one born of focused meditation. So read different opinions and develop critical understanding, then deepen what you know through meditation. This is very important. For Buddhists, ignorance is not bliss, but rather, the cause of suffering. Reality is bliss, and so knowledge of reality and wisdom of reality is blissful.

"The instrument with which a human being achieves liberation from suffering is fundamentally that which also opens the floodgates of compassion, and to open the gates of wisdom we have to get rid of our uncritical ignorance.

The Buddha once said, 'Monks, wise people, accept my teachings only after thorough analysis, as a goldsmith buys gold, only after cutting, rubbing and burning it to test it to see if it is real gold. Don't just accept it out of reverence to me. It is very important to think clearly and critically, using the rational mind to understand things, to look at the behavior of our teachers and see that it measures up to what their teachings are. We should implement the good things that they teach but not necessarily become too dependent on them."

"One misunderstanding rife in the world of Buddhism is that meditation means 'don't think anything,' to just empty your mind and shut down your thinking process. That is not correct from the Tibetan Buddhist view. It is very important to develop your critical wisdom and to learn something. If we just sit there and empty the mind without first critiquing and seeing into our preconceived wrong notions about the world, we will simply be meditating on our wrong notions. Even though we will not be thinking of them, they will be stuck in our minds. It might give us temporary peace of mind and some calmness, but in the long run we will be stuck in a kind of mud of our own confusion.

"There is a point where you go beyond thinking in terms of formal argumentation or syllogism, to a 'one-pointed' state of mind. But you would only be aiming that one-pointed mind by first critically inspecting your view of the world, making sure it is reasonable. You deepen what you have come to understand logically until it is visceral."