Phra Jomthong, Who Says His Job Is to 'Promote Peace and Harmony,' Gets Ensnared in U.S. Immigration Bureaucracy

Pomona, Calif. (USA) -- Monk Phra Bunphithak Jomthong entered the U.S. four years ago on a religious visa and has since devoted himself to serving a burgeoning Buddhist community in Southern California. Barefoot and clad in a saffron robe, Mr. Jomthong recently gave what amounts to the most accurate job description he has: "to share Buddhist practices and to promote peace and harmony among people." 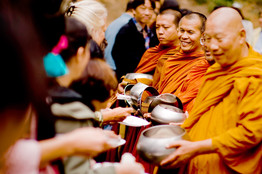 << Monk Phra Bunphithak Jomthong, third from right in this photo taken in Los Angeles last month, entered the U.S. four years ago on a religious visa.
Michal Czerwonka for The Wall Street Journal

But the U.S. government wants to deport the 47-year-old monk, after denying him permanent U.S. residency, or a green card, on the grounds that he was employed without authorization after his temporary religious visa lapsed. Now, Mr. Jomthong, a citizen of Thailand, is fighting in federal district court and immigration court for the right to remain in the country.

At issue is the meaning of "employment." Mr. Jomthong's fate may depend on whether his attorney can convince a judge that the monk's unpaid religious services don't constitute employment. "The monk may work at his religious labors but he is not employed by the temple. He took an oath of poverty and doesn't receive wages," says Angelo Paparelli an immigration attorney with Seyfarth Shaw LLP who is representing Mr. Jomthong free of charge.

The monk's saga illustrates how an increasingly backlogged and cautious immigration system can trip up some applicants striving to obey the law. In a post-9/11 world, immigration agencies, which have discovered rampant fraud with religious visas, try to strike a balance between screening out security threats and permitting legitimate religious workers.

Some say immigration officials have been far too zealous. They behave "like there are legions of terrorist monks out there," says Rodney Barker, a Boston attorney who is an authority on religious visas.

Others say the measures are necessary to prevent security breaches. "Fraud had become blatant and overt," says Don Crocetti, chief of the fraud detection and national security division at U.S. Citizenship and Immigration Services.

Regulations were changed to improve scrutiny of the religious-worker program, including mandatory site visits by inspectors to religious institutions. The new measures "have been very effective," says Mr. Crocetti. They "are not only detecting fraud but deterring fraud." He says his agency is considering performing site inspections of other employment-based classifications.

The monk entered the U.S. in early 2005 on an R-1 visa, a non-immigrant visa category accorded to individuals who perform religious duties for up to five years. The program was created in 1990 to enable churches, mosques and other religious institutions to fill vacant positions; the foreigners are allowed to be in the U.S. solely to perform religious work and can apply for a green card.

The State Department issued 13,002 R-1 visas in the fiscal year that ended Sept. 30, 2008. However, the U.S. government has tightened oversight of the program in recent years. After the Sept. 11, 2001, attacks, concern grew that the visas could be misused by terrorists or radical groups. Then in late 2005, a fraud-detection unit of the Department of Homeland Security found that a third of all immigrant religious visas had been granted on the basis of fraudulent information.

Agents uncovered churches that existed only on paper and individuals who ended up working at gas station and laundromats.

In Mr. Jomthong's case, the government isn't alleging fraud -- just illegal employment. Mr. Jomthong's attorney asserts that the monk can't be considered an "employee" of Wat Buddhapanya Temple and therefore can't be deported on the grounds of working illegally. Mr. Jomthong "doesn't receive any wages or other remuneration," says Mr. Paparelli, adding that his work is of a voluntary nature.

At the Wat Buddhapanya Temple, a nonprofit organization, Mr. Jomthong has "been volunteering his religious services and physical energy to make this community flourish," says senior monk Choe Amarayano Bhante.

Mr. Jomthong leads daily religious group chants, runs an around-the-clock emergency hotline for families and teaches Thai language to the children of immigrants. The monk sleeps in a small room on the floor on a blanket, which he rolls up and stores when he rises at 4 a.m. each morning. Community members bring Mr. Jomthong and the other two monks food. Their donations ensure the upkeep of the complex, which includes a lilly pond and small bridge built by Mr. Jomthong.

In the interim, the temple began the process of applying for a green card for Mr. Jomthong so that he could reside in the U.S. permanently. However, because of the government delay in issuing the R-1 status and approving the temple's green-card petition, his legal status and employment permission lapsed, according to his attorney.

The monk continued his activities at the temple. Thus Immigration Services denied Mr. Jomthong's application for lawful permanent resident late last year, stating that for a period exceeding 180 days he had "engaged in unauthorized employment." "We thought we were following the rules," says senior monk Bhante, conceding that the temple wasn't schooled in immigration procedure.

That is when the temple for the first time sought an attorney, who formally requested that the agency reconsider the case. In a sworn statement attached to the request, Mr. Jomthong asks that Immigration Services "exercise discretion compassionately and favorably" in his case.

"I live by the tenets of Buddhism and its 227 precepts....I do not have a salary," he said. In another sworn statement, the temple said Mr. Jomthong doesn't own property or have a bank account anywhere. A May statement of temple expenditures, for $9,330.36, itemizes electricity, postage and phone charges but no monk expenses such as room and board.

In late March, the government denied Mr. Jomthong a green card again, maintaining in the decision that he had been "remunerated since your admission, albeit on a modest, non-salaried basis...."

A month later, Mr. Jomthong's attorney filed a lawsuit against the government asking that the judge reverse the green-card denial and send the case back to the government with a legal finding that volunteer and unpaid religious services aren't disqualifying forms of employment.

"There has to be scrutiny. It is the responsibility of the government to make sure it gives visas properly," says Doris Meissner, a former Clinton administration immigration official and a senior fellow at Migration Policy Institute, a nonpartisan think tank. "That said, we are dealing with a system through which it can be extremely difficult to play by the rules."