Santa Cruz, CA (USA) -- The trails traversing the Land of Medicine Buddha property were recently closed to mountain bikers. That they stayed mostly unknown for as many years as they did is a surprise. 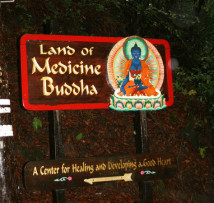 Since the announcement, Denise Macy, Land of Medicine Buddha executive director, has received emails and calls thanking her for the past access.

With trail access for mountain bikes being such a frequently contentious issue, the outpouring of thanks has been a pleasant surprise.

"I got a sense the people were appreciative of what we have offered," Macy said.

A non-profit Buddhist retreat center located in the Soquel hills, the Land of Medicine Buddha sits on 108 acres adjoining the Forest of Nicene Marks state park. After years of allowing mountain bikers access to their property's trails, the management felt the situation had gotten beyond what they could handle.

"Our trails have been inundated with mountain bikers," Macy said.

Macy emailed Mountain Bikers of Santa Cruz County, MBOSC—a non-profit organization focused on promoting responsible mountain biking practices and advocating for mountain bike trail access, to let them know due to too many riders, and bikers not obeying their rules—ride in small groups, stay quiet, only ride through the center during daylight hours, they were closing their trails to mountain bikes.

MBOSC president Mark Davidson was disappointed but not really surprised. He knew that access to the property's trails depended on the bikers keeping a low profile and recent changes made this difficult. People had built some interesting riding features along part of the trails. That attracted more riders as the news spread.

Davidson said, "Word of mouth being what it is in the mountain biking community, a lot of riders were riding it."

The trails also provide access to Nicene Marks. As other access trails to Nicene Marks were decimated due to new developments in the area around Cabrillo College, "That put a lot of pressure on the Buddha trails," Davidson said.

The challenge Davidson and the MBOSC faced in the last few years was how to keep the land from being overrun while also informing the public of the Land of Medicine Buddha requests.

Word of mouth through the mountain biking community about the trails spread more effectively than the Land of Medicine Buddha's rules.

"We had this tension; you don't want to communicate these rules or get them out there publically," Davidson said. "For fear this would draw even more riders to the trails there."

While the delicate balance the Land of Medicine Buddha and some in mountain biking community tried to quietly maintain did not work, this failure has brought increased interaction between the Land of Medicine Buddha and the MBOSC. According to Davidson, the concerns expressed to the MBOSC since the closure include noise, crowds, and possible environmental damage—mainly trail erosion.

"But they gave us an opening and are willing to listen to a solution," said Davidson.

Macy also wants to communicate effectively with the mountain biking community about this issue.

"If we can't do this what hope is there to expect people to find harmonious solutions to problems? It's practicing what we preach," Macy said.

Closing the trails is not something Macy wanted to do.

"I do wish that we had remained a secret so we could accommodate the few mountain bikers that have ridden here for many years," said Macy.

With the MBOSC and the Land of Medicine Buddha working together, those long-time riders and others may be able to bike those trails again.