Toronto, Canada -- History was created in Canada last Saturday - 12th October 2012 - as Buddhist Monks from temples across the Greater Toronto Area (GTA) came out of the seclusion of their monasteries and gathered at the Downtown Speakers Corner of the Nathan Philips Square to add their voices to the ongoing demonstrations around the world protesting last week’s spate of targeted barbaric and violent attacks on Buddhists by Moslem extremists in the Chittagong Region of Bangladesh. 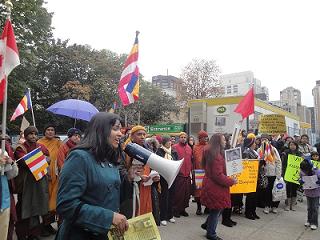 Amid fears and a disturbing tendency among the Bangladeshi majority Moslems throughout the Nation to feel threatened by the ‘handful’ of innocent Buddhists who have heroically and steadfastly preserved their ancient and hallowed Buddhist Tradition without much help from their own government or surrounding / neighbor Buddhist Nations in Asia. While nearly 3 million Hindus fled to India over the brutal suppression by Pakistani soldiers in the wake of the 1970-1971 crises, Buddhists remained stay put, with intent to preserve their religion and Bengali cultural heritage.

Last few weeks saw nearly 45 Buddhist Temples incinerated in different parts of the Chittagong Region of Bangladesh. Hundreds in violent gangs had set on the Temples attacking the venerable monks and causing them bodily harm and had gone on rampage leaving homes of Buddhists in the area looted and gutted as law enforcement officers watched and waited doing nothing to stop the violence until the Government decided to call the Army to contain the violence against innocent Buddhists and protect their homes.

Many Buddhist temples, some centuries old, have been sacked, torched and desecrated, Buddha statues disfigured, sacred relics venerated by devotees completely destroyed and many libraries with rare, valuable and manuscripts and books burnt. This tell-tale episode of religious persecution and atrocities against Buddhists with no parallel in modern times has hurt Buddhist Communities the world over and particularly among the devotees of West End Buddhist Temple and the Toronto Mahavihara where the Bangladeshi Buddhist s and Indian Buddhists in the GTA respectively worship.

Last Weekend, Saturday, October 13th, Buddhist Monks in the Greater Toronto Area, gathered in large numbers in a peaceful procession at the Speakers Corner to express their solidarity and oneness with fellow Buddhists of Bangladesh.

They had formed themselves into an ad hoc Sangha Council which called upon the monasteries and Temples in the GTA to gather to perform ‘Satyakriya’  or Affirmation of the Truth” ritual, a typically Buddhist version of a peaceful demonstration sans loud and raucous slogan shouting.

As Buddhist monks from diverse Buddhist traditions from Bangladesh, Myanmar (Burma), Sri Lanka, Vietnam, Japan, Cambodia, Laos and India stood on parade in near silence  at the Speakers Corner along with their respective Buddhist communities, many sympathizers and Saturday afternoon shoppers in the busy Toronto Downtown were seen to take part in the public peaceful protest display.