Toronto, Canada -- It has become commonplace to call the head of the Gelugpa Buddhist sect a rock star but in certain respects the comparison works. 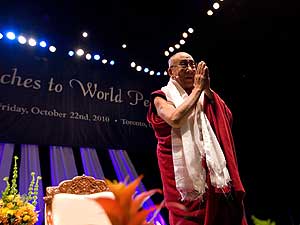 Like, say, Van Halen, the Dalai Lama sends an advance technical road crew to apply meticulous oversight to preparations. Weeks ahead of the Tibetan leader’s speech at the Rogers Centre in Toronto, a team of monks from his monastery supervised the assembly and blessing of three four-metre-tall statues, as if fulfilling the world’s most exotic tour rider.

At 75, the Dalai Lama spends about six months a year on the road, speaking to groups big and small. The home of baseball’s Toronto Blue Jays rates as big.

Television personality Seamus O’Regan encouraged spectators to welcome His Holiness by waving Tibetan flags, available for a minimum $1 donation. Mr. O’Regan pointed out that flags were available at the concourse merchandise tables.

Anti-child labour activist Craig Kielburger delivered the introduction of His Holiness, calling the talk an “honour we are about to receive.” His voice breathy and his tone evangelistic, he promised, “I’m certain that you will never forget the words that you hear from him today.”

Except, to put it kindly, the Dalai Lama is not a strong orator in English. A translator helps him find the occasional word. In a halting manner and with sometimes interesting diversions, he explained how we can create peace if we look within and find that human nature is essentially peaceful.

Wearing a tennis visor in robe-matching maroon to shield his eyes from the stage lights, he asked audience members to consider human anatomy in deciding whether we are a predatory or co-operative being.

“Look at our teeth,” he said, seated in a throne-like chair placed about where second base would be in a baseball game. “Quite close to rabbits’ and sheep’s teeth, not tigers.… We are social animal. Each individual future rest on community.”

The Dalai Lama said we should feel compassion for, and pursue dialogue with, even the violent and the predatory. Even al-Qaeda. He reminded the audience that after Sept. 11, 2001 he said the West should listen to what Osama bin Laden wants from it. It is “not good to remain distant and criticize, and not listen,” he said.

Not once did the Dalai Lama mention China directly.

To the question of how to make peace, he gave the basic Buddhist answer: self-control. The peacemaker is one who possesses a “constant calm mind. Basic mental attitude is good mood.”

Afterwards, Torontonian Pat Rigby admitted she had some trouble following the speech. “His English, well …” She made a face. “But he realizes he’s not infallible.”

“I closed my eyes and relaxed and tried to feel what he was saying instead of listening, and that worked much better,” she said. “His whole message is compassion. The story he told is, you don’t have to accept someone’s actions, but you still have to be compassionate and respectful of them.”

All in all, Ms. Rigby left happy for having been in the Dalai Lama’s presence. “I wanted to feel it. You don’t get that on TV. I was immensely impressed.”

Halla Bereskow of St. Thomas, Ont., said she came seeking a message about Buddhism. Did the religious studies student at the University of Western Ontario come away with it? “Not entirely, because I think it’s such a wide audience, he can’t address a particular group.”

And yet she left content as well. “Coming to see the Dalai Lama was a special thing. He is Buddhism,” she said.

The Dalai Lama is preparing to enter a state of semi-retirement next March, after Tibetans-in-exile elect a new temporal leader. And, inevitably, an heir to the post will have to be selected one day. While dodging the question of whether he might be succeeded by a woman, Dalai Lama number 14 pointed to his face and joked, “This will be very attractive” in female form.

Whatever reservations it may have harboured about the performance, the audience rewarded the smiling, waving and departing Tenzin Gyatso with a short but enthusiastic burst of applause, then promptly headed for the exits. The Dalai Lama may be looking forward to a future rebirth, but he doesn’t do the other kind of encore.