Can meditation make you a better parent?

by Melissa McClements, The Guardian, 15 March 2012

Melissa McClements found it hard to cope with her daughter's tantrums - until she joined a parent and toddler meditation class. How do you stay calm when your child misbehaves?

London, UK -- My toddler and I recently started a meditation class. I know what you're thinking. What kind of idiot parent would attempt silent mind control in the presence of someone whose idea of quiet time involves sticking pencils up their nostrils and shouting 'Hickory Dickory Dock'? 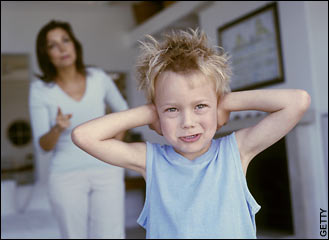 << Toddler throwing a tantrum
In the face of this, would any parent remain calm? Photograph: Chris Collins/Corbis

But now I am that idiot parent. And – despite a cringeworthy moment when my two-year-old pointed to a Buddhist monk and asked, "Why is that man wearing a dress like a lady?" – the meditation is going well. Really well. It's provided me with practical tools for day-to-day life with a toddler. For, let's face it, as adorable as their company can be, relaxing it is not.

Most of the time my daughter, Phoebe, is utterly beguiling – full of songs, giggles and spontaneous dances. But, occasionally, she experiences outbreaks of unmitigated rage. They involve floor-writhing, head-butting and a howling that would make any self-respecting banshee glow with pride. I find them hard to cope with, especially in public. There was an incident over a tuna sandwich in a cafe that I still can't think of without a shudder.

It was my husband who first came up with the idea of meditation. He started a course in it to help him deal with work stress. It all seemed a bit new agey to me: the sort of thing beloved by people who read auras and stick crystals on their kids' heads when they're sick. But then I witnessed the difference in him. He could shrug off incidences of workplace ineptitude that would previously have had him grinding his teeth in fury-induced insomnia at 4am.

I wondered if it could help me keep similarly calm during Phoebe's tantrums, and took her along to a parent and toddler meditation group at the local Buddhist centre. Believe me, this was not done without trepidation. I was brought up as an atheist to see organised religion as the source of all humanity's woes. I also think, however, that it's ignorant arrogance to write off ancient wisdom in its entirety.

We were ushered into a large room. Cushions and a basket of toys were laid out, as well as little tables, on which sat pencils and drawings of Buddha to colour in. I should point out that it is only the parents who meditate. The drooling ones are just there for a play. Two helpers keep an eye on them while the mummies and daddies zone out (when this was explained at the outset, I did wonder if they knew how to deal with attempts at swallowing a non-food item several times wider than the throat it's being forced into).

An orange-robed, shaven-headed man came in and sat, cross-legged, on a podium. I felt uneasy, until he made a self-deprecating joke about a monk telling a bunch of mothers how to cope with their kids. He spoke in a cockney accent and laughed frequently. Later, he teased some of the kids about their smelly feet.

We grownups closed our eyes so he could guide us through the meditation – initially instructing us to focus on our breathing and then asking us to dwell on a positive aspect of someone we experience, erm, 'difficulty' with in our lives.

It sounds terribly cheesy, but the children went strangely quiet at first – although they may well just have been over-awed by the unfamiliar setting. I really was able to try (and largely fail – come on, Tibetan masters spend a lifetime trying to do this!) to calm the swirling miasma of my mind.

And then I became aware that Phoebe had placed one of the drawings of Buddha on the carpet. She was punching through it with a pencil. Repeatedly. Irritated by the noise, I squinted down crossly at her through one eye.

"Close your eyes again Mummy," she laughed. I raised my eyebrows … and then remembered something the monk had said about being able to perceive the world more positively if I could change my reactions to other people's behaviour. I looked round the room. Other kids were now running about, throwing toys and mock wrestling on the carpet. A baby was screaming. All of this was far more disruptive than my daughter's behaviour. But none of it bothered me, because I wasn't responsible for them.

I decided that if I could ignore the paper hole-punching, I might really have learnt something. And, as we were leaving, I felt – truly unexpectedly – like I had (until Phoebe drew attention to the monk's outfit and showed we have much work on gender stereotyping to do).

We now attend weekly. Despite times when - mid-attempted meditation - my little one overturns the odd table or sits on my knee to try and prise my eyes open, I still feel it gives both of us a moment of calm during our busy week.

I'm not claiming that I've become a patiently smiling saint overnight. But I do think that if you can glimpse a moment of peaceful calm in the presence of your baby or toddler, you're really on to something – both as a parent and a human being.