Sydney, Australia -- The shape of a Buddhist singing bowl used for meditation has inspired an Australian scientist to re-think the way solar cells are designed to maximize their efficiency. 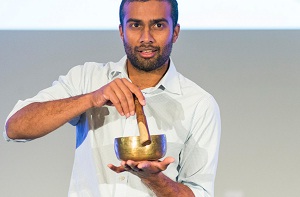 << Niraj Lal with his singing bowl.

Niraj Lal, of the Australian National University, found during his PhD at the University of Cambridge, that small nano-sized versions of Buddhist singing bowls resonate with light in the same way as they do with sound.

He’s applied this shape to solar cells to increase their ability to capture more light and convert it into electricity.

“But if the cells are singing bowl-shaped, then the light bounces around inside the cell for longer.”

Normally used in meditation, music, and relaxation, Buddhist singing bowls make a continuous harmonic ringing when the rim of the metal bowl is vibrated with a wooden or other utensil.

In research which will be published in the November issue the IEEE Journal of Photonics, Niraj Lal and his collegues have shown that by layering two different types of solar panels on top of each other in tandem, the efficiency of flat rooftop solar panels can achieve 30%.

The tandem cell design works by absorbing a sunlight more effectively with each cell made from a different material so that it can “see” a different light wavelength.

“To a silicon solar cell, a rainbow just looks like a big bit of red in the sky—they don’t ‘see’ the blue, green or UV light—they convert all light to electricity as if it was red,” he says.

“But when we put a second cell on top, which ‘sees’ the blue part of light, but allows the red to pass through to the ‘red-seeing’ cell below, we can reach a combined efficiency of more than 30..”

The team at the ANU is now looking at ways to super-charge the tandem cell design by applying the Buddhist singing bowl shape to further increase efficiency.

“If we can make a solar cell that ‘sees’ more colours and keeps the right light in the right layers, then we could increase efficiency even further,” says Niraj.

“Every extra percent in efficiency saves you thousands of dollars over the lifetime of the panel,” says Niraj. “Current roof-top solar panels have been steadily increasing in efficiency, which has been a big driver of the fourfold drop in the price for these panels over the last five years.”