New York, USA -- A new study provides the first-ever scientific proof that if you eat slowly, you will eat less -- and you will enjoy the meal more. 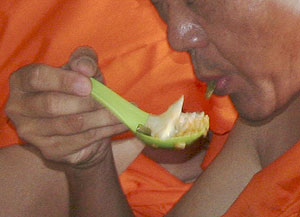 Women consumed about 70 fewer calories when they were told to take their time eating a meal of pasta and sauce, compared to when they were instructed to eat it as quickly as possible. They also rated the meal as more pleasant when they ate slowly.

Melanson decided to conduct the study when she learned there was no research to support the familiar claim that eating slowly reduces appetite.

She and her colleagues had 30 young women eat a meal of ditalini with tomato and vegetable sauce, topped with Parmesan cheese, under two different conditions. Before each meal, the women had eaten a standard 400-calorie breakfast, and then fasted for four hours.

At one visit to the lab, study participants were given a large spoon and told not to pause between bites and to eat as quickly as possible. At the other, participants ate with a small spoon, which they put down after each bite, and were told to take small bites and chew each bite 15 to 20 times.

When eating quickly, the women took in an average of 646 calories in nine minutes. But when they slowed down, they consumed 579 calories in 29 minutes, according to their report, presented at the annual meeting of the North American Association for the Study of Obesity

The women felt fuller and more satisfied immediately after they ate the meal and an hour later when they had consumed it slowly, Melanson and her colleagues found.

Eating slowly may indeed promote weight loss, or help people maintain a healthy weight, Melanson noted, given that someone who ate three leisurely meals might consume 210 fewer calories a day than someone who wolfed those meals down.