I quit the cancer treatment and got better my own way

Dublin, Ireland -- Two years ago, Alison Kelly was at death's door. She had initially been told the lump on her left breast was benign and not to lose a night's sleep over it. Subsequently, she was found to have advanced-stage cancer and underwent a mastectomy. 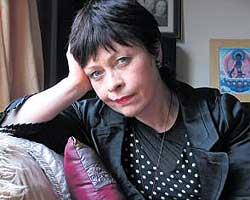 << Picture of health: Alison Kelly says she has never felt healthier in her adult life after seemingly beating breast cancer on her own

But it wasn't the disease, she believed, that was in danger of killing her; it was the cure. After suffering a profoundly negative reaction to chemotherapy, the 47-year-old Drogheda woman did something that most cancer patients wouldn't contemplate.

She abandoned her treatment and walked away from conventional medicine.

By all accepted healthcare standards, it was a crazy thing to do. She was potentially signing her own death warrant. Convinced that she had little choice, she embarked on a complex 'natural holistic' programme of treatment, devised by herself, based around diet and meditation. Not only is she still around to tell her tale, she looks the picture of good health.

Her apparent full recovery from breast cancer is either a testament to her steely resolve to pursue an alternative route or it's the result of incredible good fortune. She believes that it's all down to her decision to take back control of her condition from the medical profession.

Sitting in the front room of her home this week, she declares brightly: "I actually feel healthier than I have ever felt in my adult life. I have more energy than I had when I was in my twenties."

Ms Kelly is a mother of two and a qualified psychotherapist. One of the tools she uses in her work is hypnosis. She also teaches meditation and stress management.

In March 2003, she was referred to a specialist with a lump on her breast. She was told it was nothing to worry about. She was unhappy with his assessment, but decided to accept it. A subsequent ultrasound scan found nothing. Convinced that things weren't right, she attended the breast clinic again in January 2005. Her lump was bigger and there were other changes in her breast. This time, she was found to have advanced cancer, which had spread locally. Surgery followed, with chemotherapy afterwards.

What came next was worse than anything she had imagined. Her immune system collapsed. She was told she had developed a potentially fatal reaction called neutropenic sepsis. She says she developed a "terrifying" psychotic response to a particular steroid drug. The symptoms included mental confusion, memory loss, deep depression and suicidal feelings. Two nurses told her they had never seen anyone so ill after one dose of chemotherapy.

She is concerned that nobody explained to her that such reactions were possible. "When I asked why I had not been informed that these side effects could occur, an oncology nurse said that if they told patients about all the possible side effects of chemotherapy, no one would ever take it."

Ms Kelly believed she wouldn't survive further chemotherapy. She also decided not to proceed with proposed radiotherapy. By then, she was conducting her own research into the side-effects and effectiveness of cancer treatments.

She discovered that chemotherapy and radiotherapy only marginally improved a patient's chances of survival. On that basis, she opted to take a very different route.

"I changed my diet straight away, very dramatically. I started on a strict macrobiotic diet -- a vegan diet really. It focuses on grains, primarily brown rice. It also involves eating a lot of vegetables, such as carrots and broccoli, and apples and a small amount of nuts. It meant giving up dairy products and meat."

Alongside this, she started to take a lot of health supplements and herbal medicines. She meditated every day and started to practice tai chi. She is convinced that this combination, along with a positive mental attitude, made a real difference.

"About six months after the bad chemotherapy experience, I realised I was starting to feel better. Then every so often, I noticed that a shift seemed to occur and that I was feeling better and better as time went on. I felt the strength in my body coming back powerfully." The right mental attitude, she says, is hugely important.

"But you can't develop that positive attitude if you're on chemotherapy because it absolutely thrashes you psychologically. It really does.

"I think people who go through an entire course of chemo and come out the other side are heroes, because it's a devastating experience. I felt utterly helpless and powerless when I was getting the chemotherapy, and when I walked away from it I felt the opposite."

Ms Kelly knows her story will be treated with scepticism, and even derision, by the medical establishment. She says she has been careful to use reputable sources for her research into the various forms of cancer detection and treatment.

"Women may be interested to know that mammograms and ultra sound scans are far from foolproof and often do not detect tumours accurately, particularly in women under the age of 50. This is because breast tissue is more dense and hard to read in this age group. So, the diagnostic techniques in themselves are not guaranteed to show up a cancer."

Last month, Ms Kelly formally asked the HSE to investigate whether she was incorrectly given the all-clear at Our Lady of Lourdes Hospital, Drogheda, when she first presented with a lump on her breast in March 2003.

Her case has been examined by cancer specialist Professor Arnold Hill. He concluded that "it would have been appropriate" for her to have had a mammogram at that time. He added: "This may have facilitated the possible diagnosis of her breast tumour at this time. This may have led to a different course of action for Ms Kelly."

She says she is now "considering her position" on the matter.

As a result of her experience, Ms Kelly has strong views about the medical establishment.

She says Mary Harney should initiate a public inquiry into the misdiagnosis of breast cancer and should also legislate for mandatory reporting of misdiagnosis and malpractice.

"I feel that the real hidden festering sickness at the heart of our health service is the unwillingness of the medical profession to admit its mistakes."

If the cancer shows any sign of returning, she plans another unconventional response -- she will travel abroad to find a practitioner of ancient Tibetan Buddhist medicine.

"I certainly won't be visiting an oncologist again," she says.

Oncologists advice against going it alone

It is not common for cancer patients to walk away from conventional medicine, says Dr John Kennedy, consultant medical oncologist at St James Hospital, Dublin. He would strongly urge people not to do so.

"A very large number of breast cancer patients are cured just by surgery. So you can go out and you can paint your head blue, or live under a car or go and eat twigs, and it doesn't matter, you're probably still cured by your surgery.

"In many instances, we would give chemotherapy or hormonal therapy or radiotherapy to patients who have had surgery because we know from carefully conducted clinical trials that this gives them a higher chance of being cured than people who don't have those treatments.

"If a patient who goes off and has coffee ground enemas, ground up peach pits and God knows what else, there's no evidence whatsoever, just because that patient is fine, that those treatments have done anything for her. This is the kind of thing that the alternative medicine industry thrives on," says Dr Kennedy, who is chairman of the Irish Cancer Society medical committee.

"There are quite a number of patients who take these so-called alternative treatments along with their systemic therapy. I would have less of a problem with that, because they are still getting the treatment that we know helps them."