New York, USA -- Scientists have documented evidence that incense is harmful to human health. Incense is popular in Asian countries. It is common for the Buddhism and Taoism religions to burn incense daily. 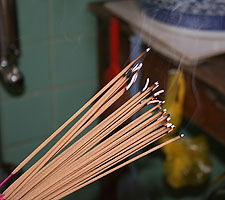 In the United States, incense is often sold in health food stores and used for religious purposes or scenting a room. However, incense is dangerous to health according to scientists.

Lin and colleagues, the researchers who studies incense, state that "a typical composition of stick incense consists of 21% (by weight) of herbal and wood powder, 35% of fragrance material, 11% of adhesive powder, and 33% of bamboo stick."

Lin advises people to reduce exposure time to incense and ventilated areas where it is burned, citing that "The air pollution in and around various temples has been documented to be harmful effects on health."

As allergies and chemical sensitivities are on the rise, many yoga studios have looked for alternatives to incense and restrict the wearing of scent to class. Some safer alternatives include natural potpourri and fresh flowers.

However the best scent of all is plain fresh air!