Male, Maldives -- Similar to the Afghan Islamic Taliban’s destruction of the priceless  Buddhist and other historic artifacts in 2001, an Islamic Extremist group has vandalized and destroyed precious Buddhist and Hindu statues in the Maldives which can never be made the same again to preserve the history. 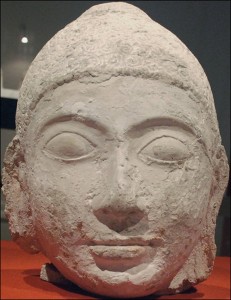 << The head of Lord Buddha statue that was on the display. Courtesy National Museum, Maldives

The scene took place at the Maldives’ National Museum where the destruction occurred.  A group of five men who were a part of an Islamic Extremist group targeted artifacts dating from the Pre-Islamic era in Maldives. Of those destroyed, many Buddhist and Hindu relics were smashed and broken to pieces making them merely unrecognizable.

Pieces destroyed, specifically included the “Bohomala sculptures, Hanuman statues, and the a sculpture of the Hindu water god, Makara.  The two five faced statues from Male were also brutally damaged. This five-faced male was the only remaining archaeological evidence of a Buddhist era in Maldives and it too was destroyed, completely destroying any true history of the country. In addition an 11th century coral stone of the Lord Buddha was also wiped out.

The museum staff were emotionally distraught and upset that any evidence of a Buddhist existence in Maldives was completely destroyed and torn down heartlessly.  They stated that all their 12th century statues were lost which were made of coral and limestone. There is no way to restore them because they were very brittle and this makes it very difficult to remake, one of the staff members said.

The Adhaalath Party, a Maldives Islamic group, who supports the newly elected President Mohamed Waheed,  stated that the constitution does not allow idols anywhere in Maldives. Maldives also does not permit non-muslims to become permanent citizens of the small island nation.