Cebu, Philippines -- HAPPY that his wife in Leyte survived the onslaught of super typhoon Yolanda last Nov. 8, a Japanese Buddhist priest distributed relief goods to survivors there and in northern Cebu. 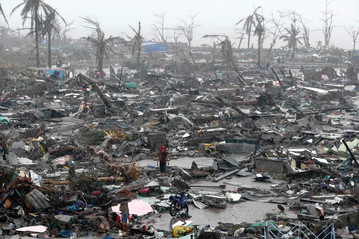 Jitoku Tsukagoshi is the chief priest at the Jyouhotsugan-ji Buddhist Temple in Isehara, a city in central Japan.

Tsukagohi, his wife Menerva and their Filipino friends made their rounds in northern Cebu last Dec. 22, where they visited Barangay Kinawahan in San Remigio, Barangay Ilihan in Tabogon, Daanbantayan and Barangay Panugnawan in Medellin.

They purchased the items using cash that Tsukagoshi was able to solicit in Japan.

Menerva, 32, said Ishikawa Nintoku, another Buddhist priest from Miyagi Prefecture, was also able to collect P84,000, which he gave to her husband.

Tsukagoshi said when the tsunami hit Miyagi in 2012, Nintoku’s mother and sister were killed and his temple was leveled.

The Cebu City Government also donated P3 million to the survivors there.

Tsukagoshi showed a photo of Mayor Michael Rama with the check.

Menerva said they are just returning the favor.

Japanese Consul to Cebu Shoji Otake said his countrymen are grateful for the Philippines’ help when the tsunami hit Japan in 2012.

Otake said Tsukagoshi has been volunteering for the last 40 years, distributing relief goods to calamity-hit areas around the world.

He gets funding from friends and temple-goers.

Aside from being a Buddhist priest, Tsukagoshi also operates a cemetery connected to his temple, said Menerva.

Menerva told Sun.Star Cebu she went to Abuyog last Oct. 23 to start construction of their house.

She said her parents and all her siblings survived the typhoon, but one person in their community was killed.

With communication cut off after the typhoon Tsukagoshi, who was in Japan, said he was very worried.

Menerva, though, was able to contact him two days later.

Tsukagoshi arrived in Leyte on Nov. 13 to distribute relief goods to survivors in Abuyog and neighboring communities.

The couple returned to Japan last Nov. 26 and came back to the Philippines last Dec. 16 with additional donations.

Tsukagoshi and Menerva will fly back to Japan on Dec. 26.