Tel Aviv, Israel -- The welcome presence in Israel of Tenzin Gyatso, the 14th Dalai Lama and leader of the Tibetan people, reminds Israelis that we are not, after all, at the center of the universe; that there are political struggles, philosophical approaches and spiritual roads that have nothing to do with Jews, Israel, or the clash between Islamist medievalism and Western modernity. 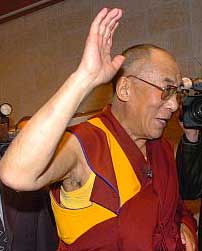 Faced with a newly installed and Hamas-led Palestinian parliament a stone's throw from our capital and menacing taunts from a Teheran just over the ballistic horizon, we Israelis could, perhaps, be forgiven for focusing mostly on our own existential dilemma.

The Tibetan struggle is not for independence from China, but for cultural autonomy. A vast, mountainous territory almost six times Israel's size, Tibet lies at the crossroads of India, Nepal and China.

It was briefly independent in 1911 as a Buddhist theocracy. But when a Tibetan uprising inside China spread to Tibet itself in 1956, Beijing began to reassert control over the region. By 1959 China had crushed the Buddhist rebellion and occupied Tibet, forcing the young Dalai Lama and tens of thousands of his followers to flee to refuge in India, where they now reside. Today, thanks to Chinese policies, Tibetans are a minority in their own land.

Jews know something about preserving a unique civilization in exile, and about facing down an enemy against overwhelming odds. And Israelis feel a special affinity to the Tibetan cause; some are helping to establish The Tibet Museum in India.

The mere presence of the cleric here (it was his third visit) made the Chinese Embassy in Tel Aviv uncomfortable. Consequently, neither Acting Prime Minister Ehud Olmert nor President Moshe Katsav met with the Dalai Lama. This sensitivity - though arguably diplomatically prudent - is misplaced given the disregard Beijing has shown for Israel's concerns over Iran's quest for nuclear weapons; not to mention the support that we, as a democracy and a Jewish state, should be showing for the cause of human rights.

Charismatic and self-effacing - followers believe he is the manifestation, or "reincarnate," of the Buddha - the Dalai Lama won the Nobel Peace Prize in 1989 for anchoring his cause in non-violence. He argues, pragmatically, that in politics reason must triumph over emotion; that there is a distinction between an evil act and the one who carries it out; that today's enemy has the potential to be tomorrow's friend.

"How do you dialogue with a Hitler or a Stalin?" an Israeli reporter asked.

Replied the sage after a lengthy pause: "It is difficult. But then violent methods are even more disastrous."

Yesterday, speaking before a reverent audience at the Hebrew University of Jerusalem, the Dalai Lama instructed that compassion does not mean surrender; that the talmudic principle "What is hateful to you, do not to your fellow man" has parallels in all the great religions; and that at the end of the day, non-violence is the only way forward for humanity.

So beyond sympathizing with the decency of a man who abhors harm to his adversary, and the apparent justice of Tibet's cause, what can Israelis take away from this encounter?

More ancient than Buddhism, the Judaic tradition is remarkably pragmatic. It places virtually no stricture above life itself. It is the civilization that aspires to the fulfillment of Isaiah's vision that "Nation shall not lift up sword against nation; neither shall they learn war any more."

Yet alluring as the Dalai Lama's message is, his is not the Jewish way. Facing an enemy that invented the suicide bomber's belt, the response of unilateral pacifism would result in our annihilation. In place of an imperfect Israel, a violently reactionary Islamist regime would arise.

Still, even though the message of non-violence resonates only as a faint hope vis-a-vis the Arab and Muslim world, perhaps the presence of this "simple Buddhist monk" will at least remind Israelis of the way we should treat each other.

No matter how acrimonious our schisms, no matter how profoundly felt the alienation or how painful the hurt after Gaza and Amona, we must abhor intra-communal violence. We must invoke the memory of another teacher of non-violence, the Rev. Martin Luther King, who, when urged by black militants in 1966 to abandon his peaceful path, brushed them off, declaring: "I'm not going to use violence, no matter who says it."