The Israel Democratic Institute Presents Constitution to the Dalai Lama

Tel Aviv, Israel -- Last Friday, at a historical meeting entitled "Reinventing Compassion," the Israel Democratic Institute presented the Dalai Lama with a draft of the new Israeli Democratic Constitution, to which the Dalai Lama contributed to the introduction. The constitution is known as Constitution by Consensus . It is a book that has been coming under fire by a number of Israeli factions. 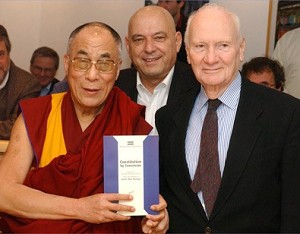 Professor Arye Carmon, president of the Israel Democracy Institute, opened the meeting speaking of the differences between that need to be accepted and of compromise.

Several prominent Israeli scholars, business people and others were at the meeting that is a historical event for democracy in Israel. Among them were Meir Shamgar, President of the Supreme Court [Emeritus]; Tali Lipkin-Shahak, journalist; Linda Gradstein [NPR]; and Professor Avia Spivak, Deputy Governor of the Bank of Israel. They posed a number of interesting questions to the Dalai Lama.

The Dalai Lama noted the strength, education and history of the people of the young nation. The country has a lengthy history but as a nation is very young. However, he warned of having expectations when democracy is introduced to the nation as something that will only bring on disappointment. The idea is to accept the problems and deal with them as they arise, as some may not be predicted.

" I believe this should be adopted as the constitution of the nation," the Dalai Lama mentioned with assurance.

Various prominent members of the Israeli community proceeded to ask him a variety of questions ranging from violence, cheap labour, and the economy to the Chinese occupation of Tibet.

With regards to violence the Dalai Lama explained that only with each circumstance should right and wrong be judged, as the larger communities should practice justice. He stated that Buddhists only use violence on rare occasions since peaceful means take precedence. He feels peaceful means are the best for a long-term solution, and the use of violence is only a temporary solution, while we need to focus on our motivation and goal. He stressed that totalitarian regimes often fail because they war with human nature and are the most violent of all regimes.

As the meeting began to focus on the Chinese occupation of Tibet, the Dalai Lama mentioned that his institution will continue but will relinquish its power to the Tibetan government once the Chinese release control of Tibet. The reason he provided focused on the concept of religious institutions not being political. Each Tibetan community should elect a government, he suggested, as he talked about the Indian government in 1963, drafted a constitution, while two thirds of the government removed the power of the Dalai Lama.

He expressed grave concern for Tibetan culture being eroded by the Chinese government that makes Chinese the official language taught in schools and enforces Chinese to be spoken in shops, which are predominately owned by Chinese. As in Mongolia, there are more Chinese in Tibet than the native Tibetans. He expressed this as " cultural genocide."

The meeting turned to focus on terrorism.

"Can you uproot terrorism? I do not think so. Physical elimination is not the answer. There is only one way to uproot terrorism; it must be done through the heart," replied the Dalai Lama.

He reasoned that as one terrorist is killed more people who support them become angry and we create more terrorists for the future. Their hostility has accumulated over many years and is based on jealousy of the western world, which is wrong, the Dalai Lama cited. The solution would be to work hard and become educated to overcome the jealousy.

He felt that pressure might be necessary for Israel to use when dealing with the Hamas government. However, they should wait to see what happens first. He said that most of the population does not want violence and the solution would be to offer a hand to work for non- violence methods.

He inquired," Why does the population agree with the Hamas?"

When talking about the connection of peace and economic cooperation he felt that cooperation must be improved since new circumstances in the economy are important. History has been that the European Union cherished sovereignty. As the world develops to be one community, unified forces are cooperating more with each other. This can be obtained by creating schools where children from all ethnic backgrounds attend school together. Thereby, creating equal schools, communities and environments.

When asked about welfare needs and a free market society he replied, " I am not an economist. I believe that economy, politics, education and health are different activities and need humanity, including military warfare which needs human feeling to be less destructive."

He spoke about true religion as based upon compassion without hatred and that politics would be better without hatred. These are lacking in the modern economy, as there is little concern for employees, customers, society and the ecology, which is being destroyed. The transfer of profits to education can eliminate this problem, according to the Dalai Lama as he went on to mention, the problems with governments are the leader has something wrong in their heart. He felt all governments have their good and bad sides.

His idea regarding happiness and cheap labour was around the loss of a structure or system, which in turn creates a lack of safety, increased crime, frustration and inequality. Again he stressed working hard, and to obtain an education and healthcare system, financed by the wealthy. A wealthy global economy must help the local economies, which will keep the people happy, creating less disruption amongst them. When people are not treated as equal, he cited, there is injustice and the new constitution provides for equal rights.

He talked about a strong nation and cultural heritage are what will bring the people through genocide to prepare for the next leadership. He talked about his trust in the Tibetan nation and Mongolia to do so as the religions are prominent.

He talked about the real meaning of compassion as not pertaining to pity, but as a sense of caring and concern that has no judgement, and is honest with justice, that we extend to everyone which includes the enemy. People always need help and as a Buddhist he must give them help.

He was asked how Hitler affected him and replied by mentioning that affection is the basis of compassion, and we must oppose the wrong doings and help that person. Anyone who feels happy killing people is not normal. So hatred must be dissolved to let forgiveness prevail. Tibetans give the Chinese compassion.

The meeting was ended by a question about a businessman's love for money.

His reply was," It is reasonable to love money. You cannot do anything without money. Without money, just prayer. But if you solely worship money and feel it is only goodness of our life, that is wrong. Money does not buy peace of mind."

The Israel Democratic Institute wished the Dalai Lama luck and thanked him for coming to the meeting.