The Amitofo Care Centre near Blantyre opened three years ago and was touted as the biggest orphanage in southern Africa operated by followers of Buddhism.

Lilongwe, Malawi -- Malawi's Human Rights Commission has ordered a Taiwanese-funded orphanage to remove statues of Buddha from all dormitories, saying their presence amounts to brainwashing children into joining Buddhism against their will. 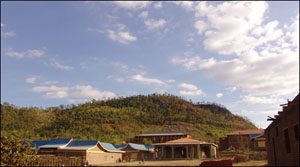 << The Amitofo Care Centre in the African nation of Malawi

The Amitofo Care Centre near Blantyre opened three years ago and was touted as the biggest orphanage in southern Africa operated by followers of Buddhism. The centre has statues of Buddha, the founder of Buddhism, in all the dormitories and an elaborate temple situated within the orphanage.

The Malawi Human Rights Commission is a government funded organization whose members are appointed by the president, but its statutes allow it to work independently to promote human rights in the southern African nation.

Commissioner John Kapito said the body acted on research at the centre stemming from concerns expressed by relatives of orphans about the statues in the dormitories and that the children may be forced to become followers of Buddhism. Relatives, he said, had also complained that children there are not allowed to eat meat and were only occasionally allowed to visit their relatives.

"This contravenes Section 23 of the Malawi Constitution, which stipulates on how best children and orphans ought to be treated," said Kapito during the orphanage's open day. "This exposure to statues can easily influence them into joining the religion unwillingly since they cannot decide their future on their own."

At the same function Malawi's deputy information minister, John Bande, hailed the Buddhist community for constructing an imposing and beautiful orphanage but asked officials at the orphanage to consider allowing children to eat meat.

Responding to concerns raised by the two government officials, the centre's director, Master Hui Li, said that while the centre was a Buddhist organization, no child was ever forced into becoming a follower of Buddhism. He said, however, that the centre emphasises to children the importance of respecting the religion which he said, preaches peace. He also called for the understanding of the government regarding the statues in the dormitories saying they were icons of peace and children should be guided and learn from them.

"We will introduce the orphans to Buddhism but they will make their own choices on which religion they want to join when they grow up," Li had said during the opening ceremony of the orphanage two years ago, stressing that matters of religion, race and culture are trivial for those doing charity work. He said his foundation was ready to help any human being.