Jerusalem, Israel -- The Upper Galilee's natural tranquility has been enhanced recently by the presence of Venerable Tenzin Palmo, one of the first Western women ordained as a Buddhist nun. 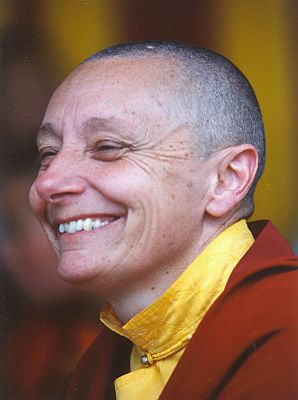 The Dharma Friends of Israel, an Israeli network of individuals who study and practice Buddhism and meditation, regularly brings teachers of Buddhism to the country. Tenzin, originally from London, came for the first time at the end of September to teach courses and lead retreats for three weeks. The lectures and retreats were held in various locations across the country, most of them at Kibbutz Tuval in the North.

The final retreat began this week, focusing on a meditation study program directed at understanding the nature of the mind as the basis of all our experiences. The retreat, which lasts for five days, is held in complete silence.

Tenzin, who speaks with a soft British accent and gently emphasizes her words with delicate hands, expressed a familiarity with Judaism and an excitement to be in Israel, "I was brought up in a Jewish district of London and my sister in law is Jewish. It is interesting for me to finally see the places you hear about," she said.

Her journey to the Buddhist nunnery began during her teenage years. "As a child I knew I always needed more," she said. "I tried reading the Bible and the Koran, but I realized that I was not theistically inclined."

In pursuit of her spiritual path, she traveled to India in 1964 at 20. She found her place in the community of Himachal Pradesh, where she studied with the eighth Khamtrul Rinpoche, eventually being ordained as a Tibetan Buddhist nun.

Tenzin remained at this community for six years until she was instructed to pursue a more intense practice, ultimately finding the quiet and peacefulness she longed for in a cave; she remained there for 12 years, the last three in strict retreat. "The hardships didn't matter; I was just happy to be there," she said.

Now she directs her energies to the administration of a nunnery, which she founded in 1999, traveling globally to raise support for it. The nunnery focuses on the spiritual development of women, teaching them philosophy, rituals, English and other practical skills.

The religiously charged environment of Israel and the broader Middle East reinforce a fundamental aspect of Tenzin's approach. "Buddhism is open because it is not based on the idea of a chosen people. It's based on a different perception... The problems here are based on the fact that everyone thinks they are right, they believe God is on their side, and it's ironic because everyone is talking about the same God. Buddhism comes as a relief to this because it is outside of the picture; it's not a part of this ancient strife," she said.

Tenzin lamented the current growth of fundamentalism. "Society is the most educated it has ever been, yet we've retreated behind the most primitive beliefs," she said, suggesting that certain Buddhist beliefs counteract the march toward fundamentalism, especially the belief in reincarnation and Buddhism's openness to other means of spiritual enlightenment.

She dismissed any conflict between the participants' Jewish beliefs and her teachings. "One can be a perfectly good Jew and learn to meditate and calm the mind," she said.

Her lectures focused on the power and importance of meditation. "Normally we are not conscious of how agitated our mind is," she explained. "Meditation is a two-step process; first you have to quiet the mind, then you look into the nature of the mind itself."