Kampala, Uganda -- The Uganda Buddhist Centre, founded in 2005,  is a major initiative in the heart of Africa which intends to provide the first stable source of Dhamma in Uganda. 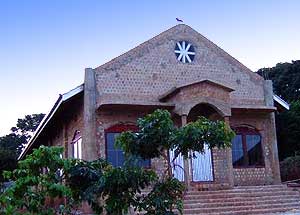 << The Uganda Budddhist Centre, founded by Venerable Buddharakkhita on April 10, 2005 was created to introduce and preserve the Buddha's teachings within the context of African culture

The centre is a major initiative in the heart of Africa and intends to provide the first stable source of the original teachings of the Buddha in Uganda. It aims to create an enduring home for the preservation and transmission of the Buddha's teachings by venerable and respectful masters established in Dhamma, and to continue to develop a landmark of Buddhist culture and teaching in Uganda and Africa as a whole.

As a step towards these objectives, a centre was originally established and built in the city of Kawempe in 2005. Today, the temple plays an important role where people can gather to receive and practice spiritual instruction, learn meditation, volunteer themselves for activities and other projects.

Programs and ceremonies organized at the centre are offered to the public free of charge, reflecting its commitment to universal access to Dhamma.

The Centre also houses a Buddha statue called “Mirembe” Buddha, which means “Peace” Buddha in the local Luganda language. This statue is made of brass and weighs 103 kilograms. It was donated by a group of generous devotees from Thailand and has distinctive African facial features. The statue symbolizes bringing the peaceful Buddha’s teachings to Africa, which has, in the past, been torn by wars and political problems.

As the area surrounding the temple consists mainly of non-Buddhists, the targetted audience for the centre's activities are for both Buddhist and non-Buddhists. While many expatriates and foreign visitors to Uganda are Buddhists, however Ugandans familiar with the Buddha Dhamma are relatively low.

The Uganda Buddhist Centre's community outreach, inter-religious dialog and cultural events serve the interests and needs of the general public, including religious groups, local  educational organization and curious visitors. Visitors are welcomed to become members of the centre and attend any or all of the activities and programs.

The current abbot of the centre is Venerable Buddharakkhita.

The Uganda Buddhist Centre was established in April 2005 in Kawempe, Uganda and used to operate on a rented space. In early February, 2006 a new property was acquired overlooking Lake Victoria.

Since Uganda is not a Buddhist country, spontaneous support from the locals are far and infrequent. As such, much of the financial support come from members in countries such as Japan, Brazil, Thailand and the U.S.A.

The Centre's future endowment will, in at least the near term, need funding from international sources until a strong Ugandan Buddhism community develops.

If you wish to help, please goto:
http://www.ugandabuddhistcentre.org/donate/document_view