Marpi, Saipan -- The first Buddhist Temple in the Commonwealth of the Northern Mariana Islands (CNMI) will soon rise in Marpi and Saipan Mayor Juan B. Tudela is already saying that its construction would have a positive effect to the local economy. 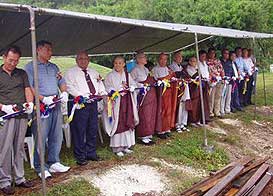 << Mayor Juan B. Tudela, third from left, leads the ribbon-cutting ceremony for the first Buddhist Temple in the CNMI to rise soon in Marpi. To his right is resident Buddhist Monk Gil Jin Lee. (Nazario Rodriguez Jr.)

Project Contractor Yang Youn Geun, president of Sae Woun Corporation, said the temple would be built through donations primarily from the 100 Korean Buddhists living in the CNMI.

The facilities, which would be sitting on a 5,000-square meter lot near the highway and down the cliffs in Marpi, will have one temple, two monk houses, a dining area, toilets, and a parking lot.

The temple will accommodate around 80 to 100 people. Youn Geun said that aside from the Koreans, there is also a large number of Chinese Buddhists on Saipan but he could not estimate how many.

Tudela told them that when he first heard of the news that the Buddhist community will soon build the first temple on Saipan, the first impression that came to his mind was that Saipan is progressing economically, socially, and religiously.

He said that Buddhism is not new to the people of Saipan.

He said that Buddhism was first introduced to Saipan prior to World War II during the Japanese administration.

“Occasionally, Buddhists monks and followers from Japan have been coming to Saipan to pay respects for their love ones at the Japanese cemeteries and at the popular tourists sites to remember those who gave their lives during the terrible battle of Saipan,” Tudela noted.

He said that when the temple is complete, Buddhists visitors would be more comfortable to pray in a temple setting.

He also thanked the Buddhists for choosing Saipan to build the first temple in the CNMI and is looking forward to establish a lasting relationship between Saipan and the Buddhists community.