Lagos, Nigeria -- Spiritual leader of Tibet, the Dalai Lama, was in Nigeria a fortnight ago to deliver the 10th Anyiam-Osigwe Foundation lecture at the Nigerian Institute of International Affairs, NIIA, Victoria Island, Lagos. 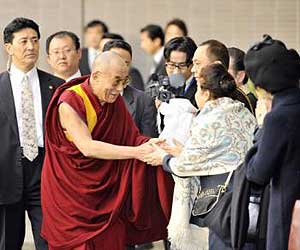 The day after the lecture, Saturday Sun was in his hotel room for an interview, where he spoke on wide ranging issues – except politics. According to him, he was in the country to "promote human value and religious harmony," so political questions were ruled out.

The 14th Dalai Lama (real name, Tenzin Gyatso) is also a 1989 Nobel Peace Prize winner. He spoke about terrorism in the world, how the world can be a safer place, his role as a spiritual leader, healing powers, his opinion about Nigeria, among other issues.

The Dalai Lama is a Buddhist monk. That means no marriage, no sex. How does he cope? And does he ever get tempted by the opposite sex?

All the answers in the interview below:

At the Anyiam-Osigwe Foundation lecture which you came to deliver, you spoke about fear leading to a compromised immune system. Can you expatiate on it?


Actually, I’m not a scientist, but scientists have looked seriously into our emotions. They have found out that emotion and physical health are closely linked. Two patients with the same illness, but one patient is mentally happy, calm, more enthusiastic, and he recovers much faster. I think I belong to that category (laughs). The other patient with same situation, same illness, but too much worry, with a pessimistic attitude, does not recover, or takes a long time to recover.
And also for preventive measure, the person who is always fresh, confident, has better immune system. A scientist from an American university told me once that anger, very serious anger, is injurious to health. It leads to hatred, which eats up the immune system.

As a spiritual leader, do you have healing powers?
As a Buddhist monk, you study five different courses. Logic, craft, medicine, literature, Buddhist philosophy. But healing powers? No, no, no. If I had healing powers, then first I would heal myself of the gall bladder problem, for which I had surgery (laughs). But I had to go for modern technology. If I had healing power, I wouldn’t need that. It therefore means I have no healing powers. I’m very skeptical about such claims. Very, very skeptical. It does not mean people do not get healed miraculously. It happens. One of my French friends, who has been a Buddhist nun for about 30 years, told me that she got cured of some ailment in her hands. It may happen, but I’m very skeptical. By chance maybe, one or two. But you can’t say it’s definite.

Furthermore, Buddhists are more of scientists, rather than believers. Buddha himself made it clear that his followers should not accept his word, his teachings out of faith and devotion. Rather, they should investigate. So in 2,600 years of Buddhist history, many Buddhist masters have checked, investigated Buddha’s words. If we just accept Buddha’s own words, it will be contradictory to our own logical investigation. Even some people consider Buddha an ancient scientist. Since my childhood, I’ve had keen interest in science and technology. We must accept the reality, rather than what literature says. I have developed a keen interest in talking or meeting with scientists, and learning from them. I’m usually interested in learning four things: Cosmology, neurology, physics and psychology. Buddhism and science complement each other. An American lady friend once told me that science is a killer of religion, so be careful. I asked how. Buddhism itself emphasizes logic and reason. Experiment rather than faith. So there should not be any sort of contradiction.
I have keen interest in finding out reality. In my lecture, I mentioned that self, or ‘I’ is the center of the whole universe. But at the same time, it is good to investigate. What is self? No answer, we can’t find it.

It’s your first time in Nigeria. What’s your impression of the country?
Very nice, but very hot. The hotel is very good, but the first night, the air conditioning in the bedroom failed, and it was very hot (long laughter).
And of course, I know that because of the oil and gas that you have in Nigeria, the country is rich and has great potentials. The standard of education is better here compared to the neighbouring countries. You have achieved democracy, and it is working, it’s good. You had a civil war, but now, it’s all settled.
However, there is a wide gap between the rich and the poor. A small number are very rich, millionaires, while the vast number is poor. Unlike India, which also has a gap between the rich and the poor, but number of middle class is quite big. I think Nigeria should close the gap between the rich and the poor by increasing the middle class, in order to utilize the national wealth more equally.

Your Holiness, you are scheduled to meet President Nicholas Sarkozy of France, and China is not happy about it.
This looks like a political matter. My visit here is purely non-political. I’m here for promotion of human value, promotion of religious harmony. These are the two reasons I’m here. Soon after Sarkozy became president, he expressed wishes to see me. I was in France, but he could not see me, he sent his beautiful wife. So now, he’s free to see me, and has invited me and Lech Walesa, the former Polish president. I have known Walesa for many years.

Can you give an insight into what you will discuss with President Sarkozy?
Top secret (long laughter)

You spoke about the wife of the French president being beautiful. But Dalai Lamas don’t marry. So do you miss sex?
No, I don’t miss sex. Not only Buddhist monks don’t marry, Catholic monks don’t too. And many Indians.

How then do they satisfy their physical urges and feelings?
Sexual pressure, sexual desire is short period satisfaction. But often, it leaves more complications. One of my friends, a Canadian, was a Buddhist monk, but after some time, he disrobed. Now he complains about so much sexual pressure, that’s he’s virtually trapped (laughs). Obviously, due to sexual pressure, people marry,soon after, they divorce. Again, they marry, and may divorce again. Divorce in a marriage which has produced children is terrible. In marriage, there is short period of sexual satisfaction, but there are many ups and downs. Monks or nuns have been trained to master their desires, and there is much less ups and downs. Monks, nuns, naturally as human beings have desires for sex, it is biological. But then, those who marry always have trouble, and in some cases it leads to murder or suicide. So, that is the consolation. We miss something, but at the same time, we live better lives. More independence, more freedom.

In marriage, if you live together, happy, and get old, there is the issue of who goes first, who dies first. Human attachment to your children and partner. And it becomes an obstacle to peace of mind. Whether right or wrong, we monks think that way. What do you think? You should join the monkhood (long laughter).
The attachments bring trap. Whether it is to a person, to substances or whatever, it is a trap. Monks are detached. One of the practices in all major religions is detachment. Don’t have too much attachment, and you’ll be contented. You have it in Catholicism, Islam, Buddhism, Hinduism, all major religions. You should be contented. Wealth, money, friend, family, contentment is best. It’s the key to peace of mind. Some of my friends are billionaires, but their minds is on more, more money. Contentment means some kind of personal check, but it doesn’t mean we no longer have desire. But attachment and desire should be separate. Without desire, then life is meaningless. Desire for good, for more service to others, desire for more benefit to others. That makes your life more meaningful. Without desire, then you’re a robot. No further progress. Genuine desire, with reasons, with logic, that’s proper desire.
Anger also can be two types. One anger comes spontaneously. That’s okay. But the anger that says this person is my enemy, I have to hit back, that is bad and is based on ignorance, lack of holistic view. If you behave well to your enemy, practice forgiveness, and reach out in all sincerity, one day the enemy and you may become best of friends. We should not close that possibility.

Your Holiness, what’s your position on terrorism, considering what happened in Mumbai, India, recently?
Very sad, very, very sad. I’m a follower of Mahatma Ghandi, Martin Luther King, and also Nelson Mandela. In the early days, Mandela believed in violence, but in the latter part, he subscribed to non-violence. I consider myself a follower of these great leaders who preach non-violence. I’m fully committed to non-violence. When the September 11 terrorist attacks happened in 2001, the next day, I wrote a letter to President George Bush. I know him, very nice person, straightforward, very nice, not like some politicians who are always reserved and distant. He’s not like that. We even became close friends. I’ll give one instance. Our first meeting, he offered some tea and cookies. I then asked, which cookie is better? He immediately showed me the better one. We developed some close feelings for each other. But that does not mean I agree with every policy he carried out (laughs).
So, I wrote a letter to him on September 12, 2001, showing my sadness, and giving my condolence to all Americans. I expressed condemnation for the terrible event. No matter what is your goal, violent method is condemnable. One violent act leads to more violence, no end. I’m totally committed to non-violence.

You are an environmentalist. Do you worry about the future of this planet?
Oh yes. First, global warming. Terrible. Of course, my knowledge is limited, but I discuss with experts. Recently, I met an Irish scientist who told me that the rate of global warming is terrible. He said within the next 15 to 20 years, some major rivers in Tibet will dry up. The lives of some human beings depend on these rivers. So it’s very serious.
With violence, the reaction comes immediately. But with the environment, the reaction is invisible. So, we take things for granted. My own contribution to keeping the environment is that in my own house, I don’t use the bath, only shower, to conserve water. It’s my small contribution to save water (long laugh).

As a Nobel Peace Prize winner, how do we curb terror in the world?
Dialogue. I usually say the 20th century is a century of violence and bloodshed. How many millions of people were killed in that century? Too many. Violence is not a proper way to solve problems. Most of the problems are essentially man-made, so dialogue is crucial. We must promote dialogue. This 21st century should be century of dialogue. And for that, we need two kinds of disarmament – external and internal.
External disarmament has begun, there is limitation of nuclear weapon, and it should continue. But in order to effectively carry out external disarmament, we need internal disarmament. If we are full of hatred, full of anger, external disarmament will be very difficult. The genuine world peace we want will come only through inner peace.

In Tibet, since 2001, we already have elected political leadership. Every five years, elections will take place. About the spiritual leader, the people will decide.