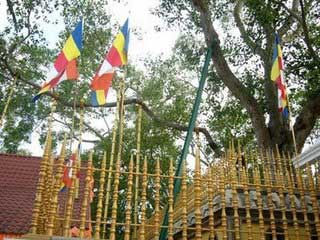 In Tel Aviv it is a very common tree found along many roads and nobody could explain the origin or any special significance of its presence. It may be that no one has taken the trouble to study it. However it is obvious that it is not an indigenous tree for according to information available it is native to countries like India, Nepal, Sri Lanka, China, Vietnam etc as it is always associated with Buddhism. Bo tree is a significant part of Buddhist rituals and was a symbol of veneration.

Later I happen to read an article written by Prof. Mendis Rohanadheera in a souvenir published in connection with a Buddhist function of Sri Lankans working in Israel. There he says that a Buddhist monk of Arahat status, by the name Punna came to Palestine which according to him was then called Sunaparantha region.

Presence of Buddhism in this region many centuries ago is also mentioned in an article written by Rev. Medagama Dhammananda Thero of Asgiriya Chapter to Divayina news paper some months back.

Presence of Buddhism in Palestine and Middle East is also mentioned in a number of Web sites under a number of topics but evidence is insufficient to identify any particular region.But a Web site under Dead Sea Scrolls mention of King Asoka of India sending Buddhist monks to Qumran region in Palestine.

In the meantime I hear that Dr. Mark Allon of Australia had done extensive research on Dead Sea scrolls found in the Dead Sea area of Palestine around Jerico.These scrolls indirectly speak of the presence of Buddhism in Palestine associated with the Qumran community.

Palestine has all the evidence of a great civilisation going back to thousands of years. On going excavations in Jerico has proved this. Palestine is also home to three major religions Islam,Judaism and Christianity.

Apart from that there are stories about a Buddhist monk named Arahat Punna living in Jerico or Dead sea area with another 3000 odd Buddhist monks and one story says that Arahat Punna silenced the sea as the noise of the waves were disturbing the monks who were meditating. The name Dead sea is supposed to have come after that.

Another important place in Jerico, religion wise is the Mount of Temptation with caves for meditation and a foot print.Normally footprints are associated with religious leaders.At the Mount of Temptation Jesus is supposed to have fought the temptations of Satan. This is the same as the story of Lord Buddha and his encounter with Mara or Death who tried to prevent him from becoming a Buddha.

Unfortunately present day researchers and scholars concentrate more on East when it comes to research on Buddhist studies and hardly any interest is shown to Middle East also called Yonaka Pura.

I hope that this bit of information will create an interest among the scholars engaged in research on the history of Buddhism.