A dhamma journey for Ugandan

A Ugandan youth who left Africa to further his studies in India returned home as the first Buddhist monk in his homeland.

Entebbe., Uganda -- IN June 1990, Steven Kaboggoza, then 24, left Uganda to study in a university in India. His family and kin expected him to return as “a rich businessman with a briefcase”. 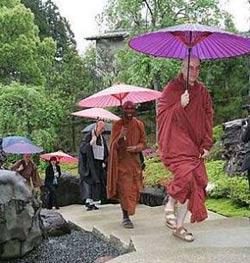 After seven years of travelling, Kaboggoza returned home as a Buddhist yogi with a shaven head and a backpack. His family was puzzled by his odd baggage: scuba diving gear and books on Buddhism.

“In Uganda, there was no Buddhist temple or even a single Buddhist teacher and certainly there is no sea in which to dive,” writes Kaboggoza who now goes by the name, Buddharakkhita, in his first book, Planting Dhamma Seeds: The Emergence Of Buddhism In Africa. He also wrote another book, Drop By Drop: Practising Dhamma In Daily Life.

Bhante Buddharakkhita’s strange baggage had something to do with his life-changing experiences. (The term Bhante means Venerable Sir, and is used when addressing a Buddhist monk.)

The religious books tell of his spiritual journey after he befriended two young Thai monks studying at the university. Kaboggoza also embarked on a trip to meet the Dalai Lama after he was inspired by his Dharma talk.

In 1994, after a 12-day meditation retreat in Dharamsala, India, which turned out to be his journey of self-discovery, Kaboggoza abandoned the academic path for the spiritual one. He joined spiritual friends in New Delhi to listen to talks, practise meditation and read Dharma books.

After a year, Kaboggoza left India for a pilgrimage to Nepal and Tibet, and eventually landed in southern Thailand, on the beautiful island of Koh Tao. To earn a living, he became a diving instructor. He had a good time, but soon became disillusioned with life and returned to Africa. Upon his return in 1997, his relatives found out about his new religion. They advised him to burn his books on Buddhism and returned to Christianity but he stood his ground.

He was grateful that he did before the tsunami struck in 2004 as many people were killed in the place where he used to dive.

As time went by, Kaboggoza grew restless. “I was lonesome without my spiritual friends and left Uganda in search of deeper Truth,” he writes in his book.

He spent a year in South Africa travelling and meditating before heading off to the United States.

In 1999, Kaboggoza attended a three-month retreat at the Insight Meditation Society (IMS) in Barre, Massachusetts, in the United States, and later stayed on to join the staff until 2000.

In 2001, he went to Tathagata Meditation Centre (TMC) in San Jose, California, where he underwent intensive meditation and monastic training that led to higher ordination as a Theravada Buddhist monk in 2002. He took on the name, Buddharakkhita.

In October 2004, Buddharakkhita went on a pilgrimage to India, Nepal and Myanmar. In Sri Lanka, his host, Dhammaruwan, a renowned child prodigy and a Buddhist devotee, offered him a choice of two Buddha statues to bring back to Uganda.

He decided on the larger statue since his name, Buddharakkhita, means “protector of Buddha”.

Buddharakkhita had not anticipated that carrying the statue would arouse so much curiosity from all around – in Mumbai, India (while on a five-hour stopover), on board the plane, and at the Kenyan immigration. He felt exhausted by the endless questioning about the statue. When he discovered that the statue had broke from its base due to constant handling, he wanted all the more to protect it. He wrapped it in a monk’s robe.

When he explained, “It is simply a Buddha statue,” he was ticked off.

While in Kenya where he took a break before proceeding to Uganda, he kept the wrapped statue in a bag.

When he returned home, his mother was happy to see him and shed tears of joy.

As it was a Buddhist monk’s etiquette, Buddharakkhita he stayed in a nearby hotel (and not in his mother’s house). But his strange attire and behaviour again drew much attention.

He wrote in his book about how he frightened two children who ran away from him muttering: “This man is going to eat us!”

“Some Ugandans thought I was a traditional medicine man (or witch doctor) when they saw me with my monk’s bag and asked what I was selling,” he says.

When he carried a big Buddhist fan from Myanmar, some thought it was a shield to protect the body, and yet others wondered if he was the royal bodyguard of the king.

Buddharakkhita’s family came to accept his new faith. Within one month of setting foot in his homeland, five members from his family became Buddhists. They included his mother, young sister and brother-in-law.

His mother was his first convert after she saw how other Buddhists – four Thais who run a restaurant in Uganda and a Sri Lankan factory owner – treated her son with such deep respect.

When he left Uganda, the number of devotees had started to increase.

He relates in an e-mail interview from Sweden: “A few weeks before I left for the United States, my three nieces and one nephew became Buddhists.”

After a year in the United States, he flew back to Africa for the second time and noticed that people still looked at him strangely.

This African monk’s alms bowl became a constant source of inquiry as he went on his alms round.

“Some people thought I was carrying an African drum, a small jembe.” A gatekeeper friend at the University of Nairobi thought the bakuli (alms bowl) resembled a pot and signified he was going on a long journey.

Well, his “food bowl” had even been mistaken as a football and a bomb!

One woman who was among a group of women waiting to harvest coffee beans in a nearby coffee plantation stopped and greeted him. Another frowned and told him: “I am afraid of the bomb you are carrying. Is that really a bomb?”

Buddharakkhita is an official member of the World Buddhist Summit, Japan.

When the charismatic monk first related his funny monk tales at the solemn 5th Buddhist Summit that was held in Kobe, Japan, in 2008, he drew laughter from the 300-strong crowd in the conference hall.

“Whenever people see me with my alms bowl, they want to buy it. Sometimes they think I am a local shaman trying to sell medicine to them.”

But after a while, the locals started to offer him alms.

To him, going for alms is a humbling experience.

“I never know how things are going to turn out. I become the centre of attraction in Uganda. People always stare at me while I am walking on the road with my shaven head and robe.”

These days, Buddharakkhita is based at the Bhavana Society, West Virginia, in the United States.

Twice a year, he would return from abroad to meet his fellow Buddhists in Uganda.

“My visit ranges from three weeks to four months. I hope to stay longer to establish local support in Uganda,” writes Buddharakkhita, who is president of the World Buddhist Sangha Youth, Uganda Chapter.

In Uganda, he is involved in Dhamma teachings at the Uganda Buddhist Centre and Kampala Meditation and Yoga Group.

He also teaches at retreats worldwide, especially in Brazil and the United States.

“This year, I chose to spend my vassa (rains retreat) and teaching engagement in Sweden,” says Buddharakkhita, who is also a Spiritual Director of the Flowering Lotus Meditation Centre in Magnolia, Mississippi, and a board adviser of the Global Buddhist Relief (GBF), both in the United States.