Lhasa, Tibet (China) -- In its Annual International Religious Freedom Report released on 30 July 2012, the US held the Chinese government responsible for the wave of self-immolations amongst Tibetans over the recent years (45 deaths so far). 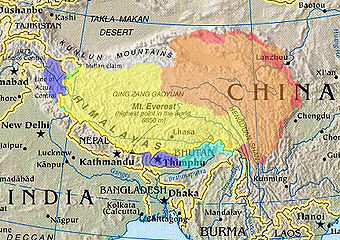 It identified that ‘there was marked deterioration’ in the government’s approach in handling religious issues during 2011 and increased restrictions were placed on religious practices especially in Tibetan Buddhist monasteries and nunneries. Beijing’s obvious immediate reaction has been to ridicule the report as being highly prejudiced, arrogant and ignorant. However, it is beyond doubt that the concerned actors are giving up their lives to send a definite message across the international community.

These are against religious repression, or for an end to the colonial style administrative set up, or against the forced patriotic education campaigns. Paradoxically, they are also cognizant of the fact that such acts are intrinsically a violation of their own religious beliefs and pacifist way of life. Then why have they turned to self-immolation as a strategy? This article makes a socio-psychological foray into the underpinnings of ‘self-immolation’ as a phenomenon and whether it will prove to be an evolutionarily stable strategy.

Three particular concepts can be adduced to explain the rationale behind these self-immolations. First, the concept of ‘altruistic suicide’, a term popularized by Emile Durkheim in context of a community-bound consciousness which propels one to sacrifice for the benefit of others. Durkheim identified that individuals who commit such acts feel overwhelmed by a group’s goals and beliefs and are highly integrated into the norms and customs of a society. In the Tibetan case, a significant proportion of these monks are institutionally integrated via their religious scriptures and practices into a code of beliefs, religious freedom being the principal one. Their identification as a single community as opposed the rest of Chinese citizens (barring other autonomous regions) provides greater scope for integration within the group. And though it would be an unfair comparison to make, but altruistic suicides seem to be emerging as an alternative strategy for these non-state actors given the stress on non-violence amongst Buddhist practitioners, and as a corollary, their inability to endorse suicide terrorism as a way to force the governments to yield to their cause.

Secondly, fatalism as an attitude has also contributed to the growing levels of frustration amongst the Tibetan population who for the lack of options feel excessively regulated and choked by oppressive discipline by the Chinese authorities. They face, what in the terms of Game theory would be called, Prisoner’s dilemma, where cooperation with fellow Tibetans would manifest in achieving the goal of a free Tibet while destabilizing the Chinese state and noncooperation would result in the obliteration of their own ilk.

Thirdly, the concept of Anomie also helps to explain the directionless-state of the Tibetans who reflect moral confusion and lack of social direction due to the two-directional pull from the Chinese state and the Tibetan fraternity. They confront conflicting choices due to lack of definitions on legitimate aspirations within a framework of desirable social ethics, which could otherwise impose meaning and order on the individual conscience. Pursuit of desires is restrained by constant abuse and excessive regulation. Viewed from this prism, the endorsement of self-immolations as a strategy could evince a breakdown of moral regulation within the Buddhist paraphernalia as well as Chinese visions of integration of its autonomous regions.

Inadvertently, a mix of the above mentioned three factors explains the occurrence of this phenomenon in Tibet, but will it prove to be an evolutionary stable strategy is a question that requires further probing.

Two crucial factors need to be kept in mind while assessing the potential for success of this strategy: first, the nature of the Chinese state and second, the sustainability of the strategy itself. In a certain way, an unyielding authoritarian polity provides enough space for devising a stable strategy as the reactions are largely predictable and the element of surprise is greatly reduced, though execution is a problem in the long run. For self-immolations to succeed it would require larger participation from the Tibetan community, which seems to be a dim possibility in this case. In the long-run the strategy might run out of steam as the grave personal losses encumbered by the community as a whole could impinge on the larger Buddhist precepts thus drawing rebuke from the spiritual gurus. Also, it seems impracticable as no specific time-frame can be ascertained to achieve their aspired goals which will render the efforts of the martyred few fruitless.

There is a pressing need for correction of their strategy by the Tibetans so as to not advance the anomie resulting from the amalgamation of religious and political ends. Moreover, the credentials of self-immolations as an evolutionarily stable strategy are highly questionable.