Buddhism In China: Zen And Now

Kolkata, India -- An exhibition of priceless Indian Buddhist Art that the Indian Museum in Kolkata has put together for display all over Asia is a reminder that Buddhism is becoming the new Communism – the ideology through which governments seek to make friends and influence people. 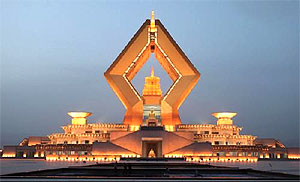 <<  The 47th general conference of the World Fellowship of Buddhists, held in Baoji in Shaanxi province, which China hosted for the first time

India’s well-meaning efforts in this direction are nothing compared to China’s massive programme with two objectives. Abroad, China is anxious to impress the Buddhist countries of East and South-east Asia. At home, it hopes its newfound Buddhist credentials will distract attention from the repression of Buddhism in Tibet and, when the time comes, allow it to choose the next Dalai Lama.

The message from China is that it isn’t only the world’s supplier of goods and services.  Last month’s 47th general conference of the World Fellowship of Buddhists, held in Baoji in Shaanxi province, which China hosted for the first time, proclaimed China to also be the global source of Buddhist wisdom. China claims to be the world’s largest Buddhist country, with some 675 million Buddhists, more than 240,000 monks and nuns, over 28,000 monasteries and 16,000 temples. The world’s tallest Buddha statue and the world’s highest Buddhist pagoda testify to its devotion.

It’s not that there are no genuine Chinese Buddhists. I have seen diners in restaurants in Beijing and Shanghai stand up with deferentially folded palms as small groups of monks entered. These ordinary people suffered a great deal for their faith during the Cultural Revolution. There are indications that Zhou Enlai was sympathetic to them. Jiang Zemin is said to have been a secret Buddhist. Xi Jinping also reportedly veered towards Buddhism until he decided that revolutionary credentials would serve him better. But none of this makes China the vigorously Buddhist nation it pretends to be.

There’s a certain competitiveness between India and China on the subject. The Chinese don’t deny that their Buddhism came from India. But they refuse to admit it came via Tibet. They also boast that China exported Buddhism to Japan, Korea and South-east Asia. The last region is the main bone of contention, as was evident from two exhibitions - “KaalaChakra” and “On the Nalanda Trail” - in Singapore. A banner at the former read, “The influence of Indian cross-cultural interactions was the major common factor across early South-east Asia”. That was the point India was making. As an Indian diplomat in Singapore gloated, “The Chinese only gave South-east Asia what we had given them to start with!” The religion of love, peace and the brotherhood of man provides cultural camouflage for competition in political, economic and military influence.

Not that such exploitation is altogether new. China’s non-Han rulers promoted Buddhism to limit Confucian influence. The first Wei dynasty emperor, who made Buddhism a State religion, wrote that the Han Chinese wouldn’t worship a barbarian god like the Buddha. But his people being also barbarian, deserved “the privilege to worship the Buddha and adopt the Buddhist faith.” K Natwar Singh says that even at the height of Communist militancy, China always produced an adequate number of Buddhist monks for dignitaries like Myanmar’s U Nu and Nepal’s Tanka Prasad Acharya.

India hasn’t been above making political use of Buddhism either. The most actively practising Indian Buddhists today are Dalits who feel the need to emphasise their rejection of Hinduism. But when we speak of Buddhism, we don’t mean Dr B R Ambedkar’s public conversion with 600,000 other Dalits. Nor do we refer to the Sri Lankan monk, Loknath, who dedicated his pamphlet, ‘Buddhism Will Make You Free’, to India’s “Depressed Classes.” Even less do we remember Rabindranath Tagore’s poignant poem, Pujarini, which describes how Ajatsatru, the 5th century BC Magadha ruler, exiled or executed anyone who dared to practise Buddhism.  Indian propaganda projects a dead faith as contemporary culture.

India isn’t the only country where Buddhism has been under attack. Although the number of self-confessed Japanese Buddhists and Shintoists add up to more than Japan’s total population, the 1868 Meiji Restoration denounced Buddhism as “a corrupt, decadent, anti-social, parasitic, and superstitious creed, inimical to Japan’s need for scientific and technological advancement.” The Meiji exalted Shintoism. China’s Confucianists, Taoists and officials resented the power of the tax-exempt sangha. Some claim Buddhism never fully recovered from the Tang Emperor Wu-tsung’s persecution in 845.

But as the Chinese are now demonstrating, Buddhism has always had its uses. Jawaharlal Nehru sent the last Chogyal of Sikkim, a rimpoche as well as the Mahabodhi Society’s president, to Lhasa in 1956, to invite the Dalai Lama to the Buddha’s 2,500th birth anniversary celebrations.  The invitation was informal enough not to indicate head of state ceremonial, but it did convey disapproval of the erosion of Tibet’s status. The Chinese retaliated by keeping the Chogyal waiting at the border, rejecting his international driving licence, and making him take a fresh test for Lhasa. When the Dalai Lama reached Nathu-la, a Chinese agent clipped a Chinese flag to his car.

The Indian Museum’s exhibition of 91 items of stone, wood, silver, parchment, silk and other materials is similarly expected to serve a diplomatic purpose when it is displayed in Shanghai from December to February, and for two months thereafter in Tokyo. After that, the exhibition (which includes the first piece of Gandhara carving) may go to Singapore and Thailand. In recent years, the Indian Museum has displayed in South Korea, Mongolia, Taiwan and Australia.

The global conference in Baoji promised to preserve Buddhism’s tangible and intangible heritage and protect and promote Buddhist culture and values. But obviously these pledges don’t apply to Tibet, where Chinese Red Guards destroyed most of more than 6,000 monasteries and where monks and nuns are subject to vicious discrimination. Tibetans yearn for the return of their exiled leader, the Dalai Lama. They mourn the mysterious disappearance of their rightful Panchen Lama, Gedhun Choekyi Nyima. They lament the persecution that forced the head of the Karma Kargyu sect, the 17th Karmapa Lama, to flee to India.

None of  this matters to China because as the old saying goes, it’s under the lamp one finds the greatest darkness. In any case, by projecting its supposed Buddhist identity, China is setting the stage to appoint its own Dalai Lama, as it has done with the Panchen Lama.