Thai politicking on the appointment of the new supreme patriarch

Singapore -- Recently there were quite a few articles on the subject of the appointment of Thailand future new supreme patriarch. Thailand Mass Media, especially the Bangkok Post published several articles from both its former and present editors. 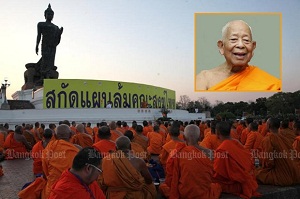 All these articles are critical of the lone nominee, Somdet Chuang for the post. Of course, we find the majority of the readers too joining in a chorus of disapproval on the appointment of Somdet Chuang as the new supreme patriarch.

The reasons listed, ranges from his link to the Dhammakaya Sect, a sect whose teachings are supposed to be deem by the majority of Thai Buddhists as deviant from the fundamental teaching of the Theravada school. It follows that his refusal to defrock the abbot of Wat Dhammakaya, for criminal and civil offences that was dropped adds more fire to the whole issue as well.

Never mind the recent demonstration by monks and nuns and some of their unruly behaviour in support of his appointment. It certainly adds more ammunition for those who are against his appointment.

Also, the perception of inaction on countless uncontrolled malpractice by monks and the so called widespread commercialization of the religion including the investigation on tax evasion charges do not in any way help Somdet Chuang himself.

The current furore has let to one reader commenting that the Sangha Supreme Council members are led by a bunch of out of touch, old folks, long overdue for retirement and should be place in some old folk home, left to enjoying their twilight years.

Of course one can draw clear conclusions on what the messages in these articles are putting forward; that the Sangha supreme council presently headed by Somdet Chuang are an incompetent lot, lacking in good judgment, bias, do not have the capability to control the flock of monks, that Somdet Chuang is lacking in moral virtue and would not be able to command the respect of lay followers as well.

But did it occur to the people writing these articles that since
Somdet Chuang is able to rise to the very top in the hierarchy of the monastic order, he cannot be that incompetent or lacking in virtue in the first place. If that is so, than there must be something very wrong and defective in the whole Thai monastic structure and reforms are certainly needed to set the whole system right again.

The Sutta Pitaka should never be tempered with as it will always be right in the beginning, the middle and the end. The Abhidhamma Pitaka can be elaborated further where necessary, but the Vinaya Pitaka can certainly be amended and addition rules incorporated where necessary to meet with the changing time to deal with wayward monks. The parajika presently have three and one kind of False Speech of the five layman precepts as its transgressions. Maybe it is time for the other precepts of no consumption of intoxicants which would include the
usage of drug and also False Speech of all kinds to be incorporated as part of the parajika offences.

Noting the rather complex nature of Thai social structure which
comprises groups such as the royalists, middle class, elites, working class, rural farmers and the Army, each with their different needs, wants and aspirations; it would be a huge task to appoint a Patriarch that would be acceptable to all these diverse and interest groups. What is surprising is that, no articles have tried to offer a conciliatory approach that could try to mend this rife.

In fact, the interest groups should take this opportunity to sit down, list their demands and wants, and try thrashing out their differences; find common grounds that are agreeable instead of using all kind of reasons and excuses to prevent Somdet Chuang from being appointed as Supreme Patriarch. After all, if all parties can agree on whatever conditions that need to be met by Somdet Chuang, he would have to fulfill these obligations. He can also act as a tool and catalyst for reforms within the Monastic Order where necessary as stipulated.

Remember, the destruction of the Sangha institution would also mean the demised of the religion which is not in the interest to Thai Buddhists and the country as a whole.