Analysis by Kalinga Seneviratne, Indepthnews.net, May 17, 2017

BANGKOK, Thailand -- The May 11-12 visit to Sri Lanka by Indian Prime Minister Narendra Modi to attend the UN Day of Vesak festival as a special guest was designed to woo Sri Lanka’s Buddhist majority, but reactions in the Sri Lankan media indicate that it has not succeeded in dispelling their suspicions about “Indian colonialism” of their small neighbour. 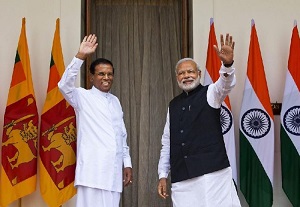 “Mahindra and Sanghamitra, the worthy children of King Ashoka made their journey from India to Sri Lanka as Dhamma-doot to spread the biggest gift of Dhamma,” said Modi in his keynote speech to hundreds of international and Sri Lankan delegates at the Chinese-built BMICH convention centre on May 12, referring to the bringing of Buddhism to Sri Lanka in the 3rd century BCE.

In acknowledging the fact that Sri Lanka was instrumental in preserving the pure teachings of the Buddha (known today as Theravada Buddhism) and later spreading it to Southeast Asia after the Buddhist cannon ‘Tripitaka’ was written in Sri Lankan in the 1st century BCE, Modi added, “the world also owes a debt of gratitude to Sri Lanka for preserving some of the most important elements of the Buddhist heritage.”

Referring to early 20th century Sinhalese Buddhist revivalist and writer Anagarika Dharmpala, Modi said: “Centuries later, Anagarika Dharmapala undertook a similar journey, but this time, from Sri Lanka to India, to revive the spirit of Buddha in the land of its own origin. In some way, you took us back to our own roots. Vesak is an occasion for us to celebrate this unbroken shared heritage of Buddhism”.

These comments should have gone down well with Sinhalese Buddhists whose community leaders have lately been fighting attempts by pro-reconciliationists and anti-Buddhist elements, especially with Evangelical Christian leanings, to paint Dharmapla as a “racist” for his passionate calls to Sinhalese Buddhists to rise up against the repression of the religion by the Christians during British rule.

Yet, they have not caught the attention of especially the Buddhist nationalists who are suspicious of both India and the current Sri Lankan government about the motives of Modi’s visit.

During the May Day rally of the Joint Opposition (JO) aligned to former President Mahinda Rajapakse, nationalist politicians called for people to raise black flags during the Modi visit, claiming his main motive in coming to Sri Lanka is to coerce the Sri Lankan government to hurry the signing of a trade and investment agreement which they see as an attempt at economic colonialism of the island by India.

Though the black flag call did not materialise mainly because of the sensitivities of having black flags among the colourful Vesak decorations around the country, there has been no let-up in critical assessment of Modi’s speech both at the Vesak function and later in the day at the opening of an Indian-funded hospital in Dickoya, in the Tamil-dominated tea plantation area of central Sri Lanka.

Opposition nationalist MP Udaya Gamanpila told ‘Ceylon Today’ that the government had duped the Sri Lankan people regarding the Modi visit and he argues that it was not for purely religious reasons as both governments had insisted. “If he is the chief guest of the United Nations Vesak festival, he should have spoken about the Vesak festival and the United Nations, and not simply about the Indo-Lanka relations,” noted Gamanpila.

“Yet he made a speech similar to that in an Indo-Lanka bilateral visit, a purely political speech. In the speech made by him he said that the trade, investments and technology should be moved across the borders of the two countries freely. What is the meaning of that statement? He is indirectly implying that the ETCA should be signed," he argued.

The Economic and Technical Cooperation Agreement (ETCA) the two countries have been negotiating for some time is a free trade and investment agreement that would also involve free movement of professionals which the government of President Maitripala Sirisena is expected to sign soon. While India is pressuring Sri Lanka to sign the agreement, perhaps to wean the country away from economic dependency on China, many in Sri Lanka, especially the nationalists, see this agreement as infringing on the country’s sovereignty.

“The Modi message was hardly non-political, or purely cultural and civilisational. With the country’s top leadership, Government and Opposition present, he prescribed the limits of this country’s sovereign existence,” argues former diplomat and prominent political scientist Dr Dayan Jayatilleka.

After talking at length about the flow of Buddhism both ways across the two countries, Modi talked about a “qualitative leap in our relationship”. Though couching his speech in cultural terms, Jayatilleka says the fact that he referred to the economic relationship between the two neighbours gives his words more economic than cultural significance.

Referring to the part of the speech where Modi said that “our partnership will stretch across almost every field of human activity, including agriculture, education, health, resettlement, transport, power, culture, water, shelter, sports, and human resources”, Jayatilleka notes out that countries and peoples are turning away from doctrines and practices of "’free flow” across borders, because they adversely affect the nations concerned.

Thus, he asks: “Does it not mean that every area of human activity of Sri Lanka’s citizens, of the inhabitants of this small island, will be impacted upon, penetrated, shaped and perhaps even controlled by the vastly more powerful neighbour?”

Buddhism has created an unbreakable bond between India and Sri Lanka with thousands of Sinhalese Buddhists visiting India each year to pay homage to the sites of Buddhist pilgrimage in northern India. Indeed, Modi announced that from August, Air India will be launching a weekly service between Colombo and Varanasi to make it easier for both Buddhists and Hindus to visit places of pilgrimage in India. The announcement was greeted with cheers.

However, still recovering from 30 years of civil war with the Liberation Tigers of Tamil Eelam (LTTE), most Sinhalese look at the Indian government with suspicion. They have seen how India helped to train and arm the LTTE initially, and how successive governments have pandered to the whims of what Sinhalese see as “chauvinistic” Tamil politicians in Tamil Nadu.

A few years ago, when the then Manmohan Singh government joined the United States and Europe in voting against Sri Lanka at the UN Human Rights Council, this was seen in Sri Lanka as a “great betrayal” of a fellow SAARC (South Asian) country. Modi is reaping that karma.

Before Modi’s visit, the Indian spokesman was quoted in the Sri Lankan media as saying: "Our approach to Sri Lanka is part of our overall 'Neighbourhood First' policy and we believe that our destinies are somehow intertwined.”

But, another former diplomat Bandu de Silva writing in the ‘Island’ asks: “Aren’t we now facing times of skulduggery in the politics of this country while India under Prime Minister Modi is practising soft diplomacy using Buddhism as across the border communicator in Asia?”

As Jayatilleka points out in a commentary published by the ‘Island’ newspaper: “Sri Lanka has always valued and guarded its separate and distinct identity from its much bigger neighbour. Despite its size and location this island has always asserted its independent space to decide its own destiny, carefully calibrating its trading partnerships and cleverly balancing its relationships with the big powers globally, to its benefit, throughout the centuries”.

It is no wonder then that a day after Modi left Colombo, Sri Lankan Prime Minister Ranil Wickremasinghe left for Beijing to attend China’s ‘One Belt, One Road’ economic summit.