Forward with Ambedkar the big picture

Ahmedabad, India -- B R Ambedkar, whose birth anniversary falls on April 14, is known as the leader of the Dalits and one of the architects of the Indian Constitution. What is less known is that he was the tallest intellectual among the leaders thrown up by the independence movement, a man whose idea of India remains relevant today. 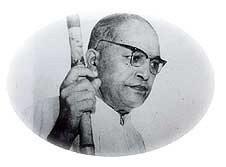 Ambedkar’s educational qualifications alone would mark him out from his peers. He obtained his doctorate in the social sciences at Columbia University in the US. He then proceeded to London, where he registered for a bar-at-law degree as well as an MSc and a doctorate at the London School of Economics. He had to cut short his studies and return to India when his scholarship ran out.

Having saved up a little as a professor at Sydenham college, Ambedkar returned to London four years later to complete his DSc in economics. While waiting for his thesis to be processed, he spent a few months at Bonn University reading economics. In the meantime, he had started studying French and German on his own. Partly, all this was about making a point: for Dalits, higher education is the route to empowerment.

Ambedkar’s wide-ranging academic background provided the basis for an astonishing mass of scholarly output. A website lists 56 books and monographs published by Ambedkar.

These cover a host of topics: the origins of caste and untouchability, Hinduism, Marxism, Buddhism, the Indian currency and banking, the partition question, linguistic states and the British constitution, to name only a few. And all this in the midst of a hyper-active political career that included membership of the Viceroy’s executive council and a stint as cabinet minister in independent India.

To read Ambedkar is to encounter a forensic and original mind. An example is his analysis of the origins of untouchability. Ambedkar rejects the notion that untouchables belonged to a subjugated race or that they were associated with inferior occupations.

He posits that untouchability arose from the confrontation between Hinduism and Buddhism. The Buddhist opposition to animal sacrifice resonated well with the then agrarian communities and posed a serious challenge to Hinduism.

Hindus upped the ante by imposing a taboo on beef-eating even though they had been beef-eaters themselves for long. People who subsisted on dead animals could not go along with the taboo and stood condemned forever in consequence.

Ambedkar is often portrayed as a man who sought to divide Indian society by seeking to negotiate separately with the British on behalf of the Dalits as Jinnah did for the Muslims.

Such a portrayal does him scant justice.

First, in seeking to safeguard the interests of Dalits, Ambedkar was merely reacting to the profound divisions created by the practice of untouchability, whereby Hindu society had condemned millions to an inferior status.

Secondly, Ambedkar saw the struggle for a better deal for Dalits as part of the incomplete project for the creation of an Indian nation.

India, he felt, was not yet a nation. It was merely a set of peoples — Hindus, Muslims and Dalits — living together in a geographical area. Liberty or independence by itself could not mark the completion of the Indian project, it merely marked the beginning.

It was only when Indian society embraced the ideas of equality and fraternity as well that India could develop a sense of nationhood. This would require, among other things, challenging the varnsashrama dharma that lay at the core of Hinduism.

Ambedkar subscribed to the ideal of a socialistic society but he did not see communism as the route to salvation. He disliked the violence and totalitarianism inherent in communism, he was disappointed that Indian communism was blind to caste and, importantly, he was alive to the role of competition in fostering economic growth.

A socialistic society, he felt, must be created not through coercion exercised by the state but by Indian society accepting its responsibility towards the underprivileged. The clamour today for reservations in the private sector shows that Indian society is still far from fulfilling this responsibility.

Gandhi’s use of Hinduism as a uniting principle for India served the purpose of achieving liberty for Indians. Nehru laid the political and economic foundations of the Indian nation-state.

The time is now ripe for the creation of a genuine social democracy along the lines of what obtains in much of Europe, one in which religion is confined to its appropriate sphere and economic growth becomes more, not less, inclusive. For the realisation of such an ideal,

Ambedkar emerges as the authentic Indian icon of the twenty-first century.