New York, USA -- In the streets of New York City the week before last, a Japanese Buddhist priest conducted a walking meditation for an hour a day, during lunchtime. 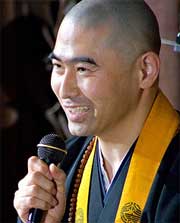 Nakagaki walked in slow meditation, along busy sidewalks, chanting quietly. He found routes that had Japanese restaurants, where he'd be likely to find donors, but regular passersby put money in his bowl as well. Each received a flier that thanked them and explained the purpose of the walk: to promote peace and teach Buddhism.

The event was unusual for obvious reasons. But it was also an act of religion carried out in the public square, which our Constitution protects and in some ways promotes. In that sense it was commonplace.

This observation may strike many readers as an odd way to view the Buddhist's decidedly non-conformist stroll. There is a high-pitch debate over religion in our country, mostly focused on national politics. Should religion have a role in government? Who will the religious right endorse for the Supreme Court or for president? When the conservative evangelist Pat Robertson gave a surprise endorsement to Rudolph Giuliani's campaign for the White House recently, it was front-page news.

But the focus on religion's connection with the nuts and bolts of national politics ignores how religion, which is irreducibly diverse, is going public in some form every day in this country. And this has as much to do with our democracy as with who influences our institutions of government.

Seeing how citizens, like Nakagaki, mix religion and democracy requires us to remember how complex our concept of citizenship really is. On the one hand, a citizen may be asked to leave his or her religious or ethnic identity at home when engaging in the public life of democracy (that's the tradition of separation of church and state). On the other hand, the public sphere is the place where people of different cultures and views interact, share ideas and create public opinion. This keeps our government in check and helps legitimize our democracy.

But how can we share our differences if difference, in the case of religion, is supposed to be kept at home?

In America we are proud to be different, and publicly so. This is what the political philosopher Michael Walzer calls the American hyphenated citizen. We can be Jewish-Americans, African-Americans or Hindu-Americans, but as different as that may be, we are all equally apple pie.

And here is where religion comes in. Religion shapes the moral and social identity of its community members. It is often what propels citizens to work together and then reach across difference.

What can the national religion debate take from this? The anti-religionists can see that, by definition, citizens act in public. Religious citizens are carrying out their religion in the act of citizenship, whether they are marching in a protest, carrying out a walking meditation to promote peace, voting for a particular candidate who fits their view of life.

The pro-religion camp, and here I am speaking mainly about the religious right, needs to see that they are not the only religion entitled to act in public. Hindus, Buddhists, Jews and members of all the other faiths that make Americans so diverse are a part of the pro-religion camp, whether they want them or not. Often these faiths model a different kind of political behavior, which seeks participation, but in less polarized ways.

Nakagaki's walk is a good example. Others include interfaith Thanksgiving meals held at various churches and synagogues and Muslims' inviting local civic and religious leaders to break fast with them during Ramadan.

In each of these cases, the goal is building community across differences. No candidates are being endorsed. Instead, these citizens publicly share a message, through their faith, and open it for discussion. This sharing builds local democracy. Religious groups that interact with one another like this are being patriotic.

Yes, democracy is about voting, and debating, but it is also about sharing difference, and one major way we are different is through our religion. Nakagaki is one small example. He has learned that being a public Buddhist is his way of adding to the American conversation about what it means to be a good, Buddhist, citizen.

---------
Matthew Weiner is director of programming at the Interfaith Center of New York and a doctoral candidate at Union Theological Seminary.