Charles Darwin 'may have been inspired by Tibetan Buddhism'

London, UK -- Charles Darwin’s moral philosophy may have been inspired by the writings of Buddhist monks, according to one of the world’s leading experts on the evolution of emotions. 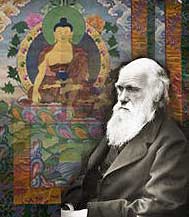 Research by Paul Ekman, a psychologist whose work has shown how the facial expressions that signal emotion are universal across all cultures, has identified striking similarities between Darwin’s attitude to compassion and morality and that of Tibetan Buddhism.

Darwin, who was born 200 years ago last week, believed that compassion for other sentient beings was the highest moral virtue. This informed other aspects of his world view, such as his passionate opposition to slavery.

Dr Ekman, who recently edited a new version of Darwin’s The Expression of the Emotion in Man and Animals, said that these views were in accord with those of Tibetan Buddhists. He had also found evidence that Darwin was aware of their philosophy.

“What I’ve become interested in in the last few years is Darwin’s work on compassion and morality, which is even less known than his work on expression,” Dr Ekman told the American Association for the Advancement of Science conference in Chicago. “And the amazing coincidence, if it is a coincidence, is that his views on compassion and morality are identical to the Tibetan Buddhist view.

“When I read to the Dalai Lama some of Darwin’s passages, he said: ‘I am now calling myself a Darwinian'.

“The Buddhist view, like Darwin, said that the seed of compassion is in mothering, global compassion: focus on others as mother. When I see you suffer it makes me suffer, and that motivates me to reduce your suffering so I can reduce my suffering. The Dalai Lama says compassionate acts help me more than the person I help. That’s identical in Buddhism and in Darwin’s explicit writings.”

Darwin knew of Tibetan Buddhism through several routes, Dr Ekman said. His close friend Joseph Hooker travelled to Tibet in 1847, and corresponded regularly with Darwin; Darwin’s wife, Emma, was also fascinated with Buddhism. She once described a grandson as the “grand lama” because he was so calm and solemn.

Dr Ekman said that he did not know whether Darwin derived his views from Buddhist influence, or whether the similarity was a coincidence. “I am certainly not saying Darwin was a Buddhist,” he said. “But his view on the nature of compassion is identical in almost the exact words to the view of Tibetan Buddhism.”