In Search of the Historical Acharya Shantideva

Los Angeles, CA (USA) -- Although there has been quite a bit of confusion in regard to the historical Acharya Shantideva, including questions about the original number of chapters and various dates assigned to the Bodhicaryavatara, this appears to be more related to a politically motivated preference for the Tibetan tradition and a failure within Buddhist scholarship to examine the history of southeastern Bangladesh, the region which has always been associated with Acharya Shantideva. 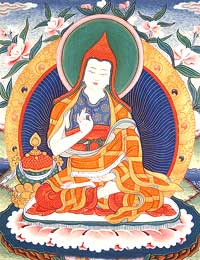 Offering not only a documented history, but also an anchoring point in the development of Mahayana Buddhism, there were two different individuals in the Samatata territory of southeastern Bangladesh named "Shantideva" and both would leave their mark on Buddhism as it was practiced in the region.

The first to appear within Bengal history is the Acharya Shantideva of the Indian Madhyamika tradition, the founder of the Avaivartika Sangha in the 6th century, and he should be considered the author of the Bodhicaryavatara in it's original composition of nine chapters, while his namesake, the later Shantideva who is identified within the Tibetan tradition as a student at the university of Nalanda in the 8th century, could only have expounded on the Bodhisattva ideal from within the understanding of his predecessor and should be considered the author of the post-dedication which would become the tenth chapter of the Bodhicaryavatara.

The Bodhicaryavatara actually offers evidence of the tenth chapter as a post-dedication in the opening verse of the chapter itself: "May all sentient beings be graced with the Bodhisattva way of life by the virtue I have obtained while reflecting on the Bodhicaryavatara", which refers to an existing composition at the time that the tenth chapter was added, but this verse, as well as others, suffered in the Tibetan translation due to linguistic limitations and is only apparent in the Sanskrit original.

Any questions in regard to the historical Acharya Shantideva and the veracity of the Tibetan tradition were answered through a series of archaeological discoveries, beginning with the Gunaighar Grant Copperplate in 1925, which records not only the donation of land to the Avaivartika Sangha, but also mentions Acharya Shantideva by name in the 188th Year of the Gupta Era (506 CE).

Although the first published report on the copperplate contained several errors --- with the most obvious one being "Va [ya] vartika", designating the difference between Buddhist Non-Duality and that of the Brahmic (to not fall back in illusion) --- it appears that the author of the report was aware of the tradition of an independent Madhyamika school, but he was clearly more familiar with the Tibetan pseudo-biographies, the historical value of which would be later challenged by academia in general:

The plate records a gift of land from the camp of victory at Kripura by Maharaja Vainyagupta made at the instance of his vassal Maharaja Rudradatta in favour of a Buddhist congregation of monks belonging to the Vaivarttika sect of the Mahayana, which was established by a Buddhist monk, Acaryya Santideva in a Vihara dedicated to Avalokitesvara.

The name seems to have reference to the doctrine of Vivarta (Illusion), which found so much currency in post-Sankara Vedantism, but the term is never used in Buddhist philosophy as far as we know.

Nevertheless, it is an interesting fact that in the far Eastern corner of India, Mahayana Buddhism flourished under the broad patronage of both Buddhist and Brahmanic kings fully a century before the time of Yuan Chwang and allowed one of its teachers to found a new and distinct school of monks. It is tempting to identify Acaryya Santideva of our plate with the famous Mahayana teacher of the same name who wrote the Siksasamuccaya and the Bodhicaryavatara. There is nothing however to show that they are identical.

The keyword within the above excerpt is "identical" because the author of the report was not aware of, nor looking for, two different Shantidevas who would not only leave distinctive marks, but who were clearly related to the same ancestral family, with their lives and histories interwoven in ways which otherwise would have been impossible, as they occured within the environs of the same lands donated to the Avaivartika Sangha.

Contrary to the Tibetan tradition, the later Shantideva who is claimed to have studied at Nalanda did in fact become a king within the Samatata territory, having been shown through archaeological discoveries which record him as the first king of the Deva dynasty, a line of Buddhist rulers (approx. 750 - 850 CE) who considered the Bodhisattva ideal to be the highest Dharma and made the welfare of all sentient beings the law of their lands.

Although it cannot be said with certainty whether the tenth chapter was added before or after he became the ruler of the Samatata territory, the same cannot be said about the dynamics that would bring the Deva dynasty into existence, as their family lands were instrumental in maintaining the independence of the region because of their location on the Mainamati Ridge. The Deva dynasty was a kingship of necessity, during a time when lawlessness ruled over Bangladesh and the country had been overwhelmed by repeated foreign invasions, which included both the Tibetan and Mongolian armies in the North.

Of the Deva dynasty, it would be Anandadeva, the grandson of Shri Shantideva, who would leave the most extensive legacy behind, including a monastic university that would not only cast it's shadow over the university of Nalanda, but more than likely became a contributing factor in the older institution's fall into disrepair, as the newer university continued to thrive during the same time period.

In comparison with the life-spans of other ruling families, the Deva dynasty was short-lived, but the very culture and society they gave birth to would survive for years after them, shown not only through the peaceful transfer from one ruling dynasty to another, but also through the reports of travelers of the time who continued to comment on the region's unique expression of the Dharma, ending only when the region ceased to be a seat of authority in the 11th century, followed later by the eventual fall of Bangladesh to the conquering armies of Islam.