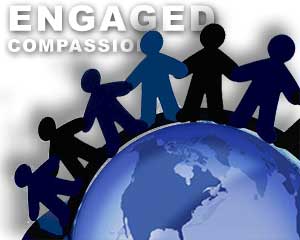 San Francisco, CA (USA) -- Last night, at a Berkeley fundraiser for the East Bay Meditation Center, prominent Insight meditation teacher Joseph Goldstein gave a general talk on Buddhism, and as he spoke in his gentle, warm, candid, funny, luminously clever way, I felt a familiar tightening in my stomach.

The talk started out like this.  There is tremendous suffering in the world.  It’s not hard to see.  War, oppression and destruction.  But if we look closely, we find that the root of that suffering is in the mind.  Greed, fear, and hatred.  And it’s not just “other people” who have this greed, fear, and hatred; it’s us, too.  Therefore, using Buddhist teachings, we turn our attention inward toward the mind/heart, healing suffering from the inside out.

Later, when asked whether his Buddhist practice could be formulated into a plan for social change, Goldstein said Yes: through  compassion.  Not a simplistic type of compassion, but a compassion that is born out of nearness to suffering.  This is more difficult than it sounds, he noted, because our deeply ingrained habit pattern is to try to push suffering away from ourselves.  Get rid of it.  But in order to have strong, profound compassion, we need to go toward suffering.  Without romanticizing it, but seeing it for what it is.

Now, I like Joseph Goldstein. I saw him speak once before at the Cambridge Insight Meditation Center, and he’s hilarious and wise and a gifted storyteller.  And on one level, I agree with what he said last night.

The problem, for me, was what went unsaid.

As Buddhists and dhamma practitioners, I would love to see us having more conversations about what compassion and social change actually look like: locally, on the ground, in practice.  Because it’s too easy for us to invoke these words — compassion, inner work, social change — and assume that everyone is on the same page.

The truth is, we’re not all on the same page.  And it’s not until after the event is over, on the subway ride home, when a gaggle of us start discussing in detail the relationship between inner and outer work, that these fundamental differences emerge, sharp and cold, like mountain peaks, from the soothing golden fog of Buddhist unity.

Here are a few of my disagreements with what I hear as spiritual liberalism, coming from my friends in dhamma.  Again, even as we all work toward developing compassion and reducing global suffering, we have tremendously divergent views on what this means.

1.  Mystified Mechanism. When we start doing the inner work of developing compassion and insight, our outer social justice work will automatically get good.

How?  Sometimes folks talk about spirituality helping to reduce burnout, or converting the motivation of anger into the motivation of compassion.  But while both are wonderful benefits, neither speaks to the testable effectiveness of the particular outer work itself.

2. Healing As (Total) Resistance. Smiling at strangers on the subway is resisting militarism.

Well, I disagree.  Our healing work, spiritual work, and structural resistance work ought to inform each other, but they are not interchangeable substitutes.  Mandela didn’t inspire a movement and challenge the status quo just by praying compassionately for the liberation of the oppressor. (Though he did that, too.)

3. Social Change Relativism. Together, a growing movement is working for peace and justice in the world.  From green business to prison meditation to high-school conflict resolution programs on MTV, signs of hope and change abound.

Are all forms of progressive activism equally useful?  No.  But the shorthand of social change frequently obscures this fact.  Coupled with a feel-good engagement paradigm, the ‘every little bit helps’ idea makes it very difficult to hold each other accountable for our political work and its actual outcomes.

4. Root vs. Radical. Radical political agendas fail to grasp the root cause of oppression: dualism.  And ultimately, the best ways of overcoming dualism are through meditation and small-scale, intimate, interpersonal, compassion-building exercises.

Even if dualism is the “root cause” of oppression, that doesn’t make it the best or most actionable point for resistance, always.  Besides: why is this idea of dualism so pervasive and tenacious, anyway?  In large part because of the political and material structures (i.e. schools, economies, hierarchical religious institutions) that train human beings.  Without changing the power relations governing those material structures, there’s little hope of giving non-dualistic living, and appreciation for inter-being, a real shot on a global scale.

5. Buddhopian Visions. Gandhi said it best: “Be the change you wish to see in the world.”

Often, this gets construed to mean: build the best alternative society you can, and slowly it will change the entire society.  Especially in Buddhist communities that prize extended retreat time, a decade of study with a realized Asian master, and this sort of removal from everyday householder affairs, there’s a danger of trying to build our sanghas into utopias, and assuming that they will automatically radiate peace and well-being into the world.  Might be true on an individual or small-group level, but why should we believe that we can scale up well-being from personal transformation to world peace, without specific strategies for tackling enormous material systems?

Compassion lies at the core of the dhamma, one of its most beautiful and powerful dimensions.  But when we treat it as self-evident in conversations about social liberation, putting it at the end of the sentence instead of the beginning, I fear we do great injustice to its meaning.

Looking forward to finding and contributing to a radical sangha in the Bay Area whose work extends beyond the healing, service, electoral-political and identity realms.  (Where dhammic folks are already great and strong.)  Any leads?