Lawrence, Kansas (USA) -- Palden Gyatso has experienced horrors most people can’t even imagine. As a political prisoner held by the Chinese government for 33 years, he was beaten, shocked with electric cattle prods, suspended from a ceiling above a burning fire, starved and forced into labor. 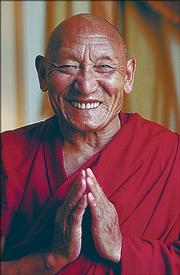 And yet, through all that, the Tibetan Buddhist monk maintains a contagious smile and says he has no hard feelings toward his captors.

“I feel this monk is an embodiment of tranquility,” said Ling-Lung Chen, a local Buddhist practitioner. “You can’t really detect any threat, resentment or hatred in him.”

Gyatso will bring his message of compassion to Lawrence this week during his third visit here in four years. He will appear in four events, telling his story and offering suggestions for getting through difficult situation and reconciliation.

“I feel this is a human story,” said Chen, who is helping organize the events. “It’s not just a Buddhist story.”

Gyatso, 72, was put in prison in 1959 for resisting China’s overthrow of Tibet’s government. He was released for brief periods for the next 33 years but spent most of that time in prison.

He was released in 1992 and now lives in Dharamsala, India.

Chen recalls that she once asked Gyatso what he most feared. He replied that his biggest fear was losing compassion for his torturers.

Jasonna Grabher O’Brien, associate director of the Hall Center for the Humanities at Kansas University, which is helping sponsor Gyatso’s visit, said his story was accessible on many levels.

“Not only did he survive, but he’s concerned with maintaining a sense of compassion for even those who were responsible for his incarceration,” she said. “I think it’s an incredibly hard concept.”

In addition to telling his personal story, Gyatso has been involved with advocating for Tibetan freedom through the years.

“He has more right to talk about freedom than anyone else,” Chen said. “He paid with his life all these years.”

Gyatso will be involved in four events:

Each of the events is free and open to the public.

Marian O’Dwyer, a practicing Buddhist who is in charge of the visit, said if nothing else, Gyatso’s story helps people put their own troubles in perspective.

“Any difficulty you might have, if you read his book or hear his talk, makes whatever difficulty we have seem slight and small by comparison,” she said. “I can’t imagine any more dire experience.”

Palden Gyatso will appear in four events in the next week in Lawrence: