Lord of the Dragons

Kuala Lumpur, Malaysia -- When destiny knocks, it’s futile to run. A Tibetan master and his wife finally surrender their only child to lead the Drukpa (or Sky Dragons) lineage. 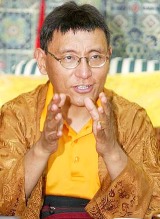 << Life of discipline: The 12th Gyalwang Drukpa was recognised as a spiritual leader of a lineage when he was only two years old.

NOT every parent will give up their child on demand. Not even a Tibetan master whose firstborn has been identified as the spiritual head of a lineage.

Bairo Rinpoche, a reincarnate lama, and his wife, could not bear to be apart from their only son, who, at two years old, was recognised as a reincarnation of the founder of the Drukpa lineage, Tsangpa Gyare Yeshe Dorje (1161-1211).

Reluctant to surrender the child, the couple fled to Nepal and went into hiding for “six or seven months” before returning to India.

“My parents didn’t want me to be recognised as a reincarnation of a spiritual master,” said the 12th Gyalwang Drukpa or spiritual head of the Drukpa lineage.

Speaking fluent English, the 47-year-old was in Malaysia for a week to impart his teachings in conjunction with the 800th year celebrations of his lineage.

Bairo Rinpoche is a former abbot of Kathok Zhichen Monastery in Kham, eastern Tibet. A Dzogchen master, he is said to be the 36th reincarnation of the Pandit Vairochana, a disciple of Guru Padmasambhava (a Buddhist master) and renowned translator. The present Gyalwang Drukpa’s mother, Mayumla, is the daughter of a yogi, and a disciple of many great lamas.

At three, the 12th Gyalwang Drukpa started talking or “becoming naughty”, as he puts it. “I was telling everybody that I had a monastery and I had to go and where I am is not right.”

The religious men approached many great masters, including the Dalai Lama, and wrote to his parents to give up their “special baby”. After much pressure, the parents finally acquiesced.

A day before the religious search team came to their home in Dalhousie, India, the little boy had predicted the event to his parents. 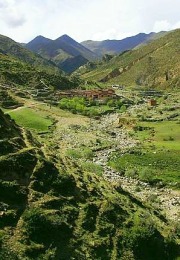 “My uncle told me that I informed my parents, ‘Tomorrow, my people are going to pick me up. I’m going back to my home’,” he said. He told his father about a man with a white beard (the first Thuksey Rinpoche) who was coming to take him to his monastery.

“I was feeling pretty positive. I had a sense that I was going home,” said Gyalwang Drukpa. At that time, he recognised and called by name some former servants and disciples of the previous Gyalwang Drukpa. He also correctly identified some of his predecessor’s belongings.

He said: “I used to remember events in my past life when I was younger. Now, I don’t. It’s been too long.”

When he was little, he was “fond of reading the Dharma and sitting on his throne”. “I insisted that my parents, uncle and nanny make me a throne. I would sit on it and pretend that I was meditating.”

Read also: Tibetan Buddhism: How it all began

The Gyalwang Drukpa has since re-established a home for the Drukpa lineage in Darjeeling and Kathmandu. Other than the monasteries located in the Himalayan region, many centres have been opened in Western countries and the Far East.

There are about 10 main lineages and 20 sub-lineages in Tibetan Buddhism. The Drukpa lineage, with its 800-year legacy, is one of the oldest.

“The big crowd – people rushing, crashing into each other and crying with joy – scared me to tears. Otherwise, I do not remember crying when I parted with my parents,” said the Gyalwang Drukpa. During the enthronement, he had to sit for about six hours, with only a small toy deer to distract him.

At six, he studied the Dharma; he had it memorised at nine. By 14, he had memorised all the Buddhist texts. He had eight tutors, and study hours were from 6am to 9pm with a lunch break. If he was being punished, there would be no lunch break and he might get “a smack”.

Did he feel like a prisoner in the monastery?

When he was a child, he slept alone and did not play with other children. He said: “They put me in a gilded cage. As a teenager, I didn’t have the time to go out and see things. I felt a bit lonely.”

When he was 19, he started assuming responsibility as spiritual leader. His duties required him to travel around the world.

What keeps him going?

“When people smile, I get motivated and when people are grumpy, I get less motivated,” he said. “My mission is to help people and when they benefit, naturally, they would smile.”

The 12th Gyalwang Drukpa was born at Lake Rewalsar (the Lotus Lake) in northern India. The birth took place during a major ceremony of lama dances and a holy feast celebrating the birthday of Guru Padmasambhava. It was the auspicious 10th day of the first month, a sacred day in the Tibetan calendar. 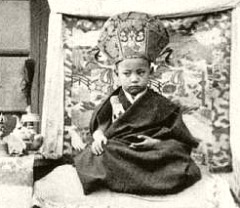 << Enthronement: Gyalwang Drukpa sitting on the throne at age four.

Several propitious omens occurred before and during his birth, according to the website dedicated to his lineage (www. drukpa.com/gdrukpa/gdrukpa_main.htm).

During his mother’s pregnancy, it was said that his parents often heard the chanting of the Amitabha mantra coming from inside the womb. Apparently, too, there were thunderstorms, snow, a rainbow, and other signs “to celebrate his birth”.

Defending his father’s initial resistance to handing him over to the monastery, he said: “My father loves me very much and didn’t want me to go through all these burdens that he foresaw I would go through.”

By burdens, he meant his responsibilities to “hundreds of monasteries and hundreds and thousands of people, including monks and practitioners”.

He reckoned that his responsibilities are heavier these days.

“The lineage is in trouble,” he said, adding that it is getting less help and support from the people. There are fewer teachers as many old ones had died.

The founder of his lineage saw nine dragons and thus named the lineage after them. The Drukpa lineage allows him to continue the bloodline, such as getting married and procreating.

“But I’ve decided not to,” he said. “It would be a waste of time to raise a child to find that he would misbehave (and not walk the spiritual path like him). Also, I would be distracted and may not have the time to offer my service.”

Reflecting on everything that has happened, he said, “I have no regrets. I was not appreciative when I was younger but now, I am.

“My happiness and peace of mind come from the experiences I went through. I have a great sense of satisfaction.”

Devotees claimed that the present Gyalwang Drukpa is responsible for miracles in places he has visited. For instance, some claimed that in drought-stricken areas, it would rain after his visit.

When asked, he did not stake any claim to the so-called miracles attributed to him nor is he egoistic about them. He merely said that he gave his “best wishes to benefit all sentient beings”.

“Miracles do not need to be performed. If you perform miracles, then it would be a performance,” he said, adding that miracles happen almost naturally.