The monk who packs a punch

Chiang Rai, Thailand -- HE CUTS an arresting figure: handsome despite his shaved head and eyebrows, sturdily built, heavily tattooed body cloaked in the heavy burgundy folds of a monk’s robe. 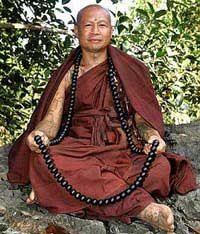 << Phra Kru Ba Neua Chai was a lethal muay thai fighter before he was ordained as a monk and founded the Monastery of The Golden Horse, near the Thai-Myanmar border. Here, he attempts to build a brighter future for the empoverished children of the Golden Triangle

A string of giant black prayer beads hang from his neck to his knees, while an ancient ankus (a hook used to handle elephants) and a Chinese horsewhip peep from a satchel he slings around his shoulders.

Before he became a monk, Phra Kru Ba Neua Chai, 45, was a lethal muay thai fighter who lost only three fights in a 15-year professional boxing career. He also studied law at Ramkhamkheng University in Bangkok, and was married to a petty trader with whom he has two children.

But in 1980, he gave everything up, got ordained as a monk and founded the Monastery of The Golden Horse, nestled in the mist-shrouded hills north of Chiang Rai near the Thai-Myanmar border.

For the last 17 years, the charismatic man has devoted his life to spreading the Dharma. He’s turned what was once dry, uninhabited forest land into a conservation area with paddocks and pens for scores of Thai horses and magnificent fighting cocks.

It has also become a home for many young boys from various hill tribes who have been orphaned, abandoned or made homeless by ruthless drug guerrillas who traffic heroin, opium and methamphetamines in the area, known to the outside world as The Golden Triangle.

In the monastery, these boys are ordained as novice monks and learn how to read and write. The abbot also teaches them Buddhist scripture, horse-riding and muay thai.

In person, Phra Kru Ba Neua Chai exudes a beatific calm. Visitors and little monks nod respectfully as he walks the grounds of the temple; even mongrels trot obediently next to him, patiently sitting each time he stops walking.

On a big boulder where he once meditated for 15 days, he sits in the lotus position, fielding questions about his life through an interpreter. His farmer parents had five children, none of whom survived, before he was born. Named Samer Jaipinta, he was a difficult baby in his first three months.

“Apparently, I wouldn’t stop crying. My parents consulted an astrologer who said I was not a normal baby and that I needed an elephant and a horse to be my guardians,” he says.

They were too poor to buy the animals so his father drew them on the wall above the front door of their home. The baby – who was also given an ankus and a horsewhip he still carries today – stopped crying. His folks later ran a business slaughtering chickens for the village, something that distressed the young boy.

“I would release them until my father sat me down and told me that he needed to do it. If not, the villagers would go hungry,” he says.

He was given a respite from the slaughtering when his father started breeding fighting cocks and he was tasked with entering them in fights.

“They always won, so I could make money, and not have to slaughter.” 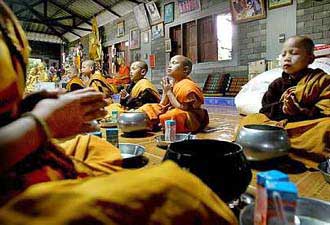 Children of the Monastery of The Golden Horse  >>

He smiles when asked if cock fighting is a cruel sport. “They’re born warriors. They were born to fight and will fight regardless.

“Like these creatures, we all have to fight – for freedom, independence, to be who we want to be. They are the best boxing masters one could have. They have no tools, you learn a lot just by observing how they move.”

He took up muay thai when he was 13 and became very good at it. From age 14 till 29, he was known as Samerjai and took part in hundreds of muay thai matches at temple fairs and stadiums. During this time, he also attended Ramkhamkheng University and got married. His two children still visit see him occasionally. His son, 21, is a soldier and national boxer. His daughter, 19, also a muay thai exponent, is an undergraduate at an agricultural university in Chiang Rai.

Although there were no major upheavals in his life, he was dogged by questions on human suffering.

“Maybe it was predestined that I study law so that I can compare the laws of man and the laws of karma,” he says.

A visit to the university’s forensic department made him reflect on his life.

“If I had 40 years left, I’d spend 20 years sleeping and another 10 working, eating and socialising. If I’m lucky, I’d live out the rest of my life right. If not, my life would have been a total waste.”

At 29, he told his wife of eight years that he wanted to get ordained. He left for Chiang Rai, where he sat on a rock in the forest and meditated for 15 days. Bees came and covered his body.

“It was as though they were my teachers. Each time I couldn’t focus, they would sting me.”

To show he had been reborn to devote his life to the Buddha, several monks spent four days and nights tattooing his body with scripture signifying that he’ll never give up his vows.

He told his wife that he had found peace and detachment from earthly desires, and that both of them should start life anew.

Soon, news about him spread, and people came to listen to his teachings and seek solutions to their problems.

People who benefited from his advice came back with offerings. One gave him a horse, which he used to travel to neighbouring villages to build more temples and to visit the sick.

There are now more than 100 horses in the temple. Kru Ba teaches his novice monks how to care for the animals and, in the process, imparts values such as responsibility and loyalty.

Yet other devotees offered money to build big temples.

“Monks have no need for money, we also cannot have debt,” he says.

He offered them alternatives: “Why not support orphans and help them stand on their feet? Why not give to build schools so that they can have an education? Why not use it for salaries for teachers to teach these children?”

His work earned him the backing of the Thai army. It also won the approval of a revered chief monk in Bangkok who encouraged him to help the hill tribes. The war between various drug lords has left in its wake a host of problems such as drug addiction, kidnapping and prostitution.

On his horse, Kru Ba would – among other things – tell villagers to plant vegetables instead of drug crops and haul addicts back to his monastery to help them recover.

He has become an enemy of drug barons who have tried to kill him. He has defended himself against attackers with his muay thai skills and survived a serious poisoning attempt through meditation.

He believes he has been spared death because his work is not done yet. He shows me two bullet holes in the hut where he sleeps.

“They put the nozzles of their guns through the holes, but when they tried to pull the triggers, the guns jammed.”

Nowadays, he has the protection of the Thai army. “They get very jittery when I meditate because I sometimes do it for six hours at a stretch,” he says with a laugh.

Kru Ba is happiest when meditating. “That’s when I’m detached from everything and give energy back to nature. Nothing belongs to us, not even our bodies.”

He’s been known to wake up his 20 or so charges – aged between four and 17 – before the crack of dawn, teaching them how to find peace and stillness within their psyches.

Asked whether he expects his charges to be fully ordained monks, the abbot says: “It’s their own karma. This temple is their university of life. I try to teach them to understand life, because if they do not understand it, they will experience suffering.”

Although he left the ring many years ago, Kru Ba still practises Thai boxing every day.

“Boxing for me is meditation. It helps me find peace and stillness. It’s food for my mind, and when my mind is full, I feel free.

“If you feed your mind food, you get peace. But if you only feed your body, you’ll just get fat,” he says, letting out a loud chortle.