Farewell to a much-loved monk/artist

Kuala Lumpur, Malaysia — There are quite a few festivals that fall in April. For the Chinese community, there’s the annual Ts’ing-ming when they visit the graves in honour of their ancestors. 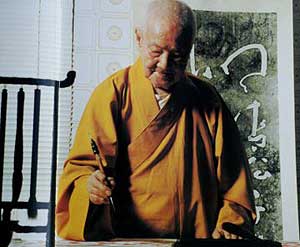 << Bo-Yeun was not only a well-respected monk, he was known for his painting as well.

For the Christians they observe Good Friday and Easter, the death and rebirth of their saviour Jesus Christ. And the Thais who live here celebrate Songkran, the annual water festival signalling their lunar New Year.

It is in this mixed mood of death and birth that I write about two nonagenarian Malaysian artists. The venerable Bo-Yeun, 96, passed away this week and Fung Yow Chork, 91, is critically ill in hospital (I shall write about him in another article).

In the early years, there were two well-known artists/monks in Penang. One was the late venerable Chuk Mor from the Triple Wisdom Temple and the other was Bo-Yeun from the Kek Lok Si  temple. After many years, Bo-Yuen left Penang in 1961 to set up the Hu-Bin Vihara in Petaling Jaya.

They were among the first batch of young monks who migrated from Fujian, China, to serve in the local temples. Their passing marks the end of that line of descendants from China.

Apart from looking after the spiritual well-being of those who came to the temples and the duties of running those places of worship, they acquired other skills. In the old days, to be an accomplished person one had to be able to read, write, sing, paint and do martial arts.

Such was the case with Bo-Yeun, who was both respected as a monk with a large following as well as a Chinese brush painter/poet/calligrapher, and perhaps a secret martial arts expert too. The National Art Gallery honoured  him with a major exhibition in July 2000 and his artworks have been collected widely over the years. A few examples of his works will explain why.

Every Chinese brush artist likes to paint landscapes; this one by Bo-Yeun is a typical example (right). It shows a bird’s eye view of the geography with the darkest black marks in the foreground being the tree tops. The middle ground, mid-black ink, is marked with buildings suggesting a village. Finally, the distant mountains are brushed in with light grey ink.

The artistry is in the void left unpainted in between the land form to suggest perhaps the lake or the river and is finished off with three junks. This painting is done with an economy of shapes, lines and colours and is so sure of hand that it can only be the work of a well-practised artist.

The Eastern tradition of aesthetics and ethics places nature and its environment at the same level the Western counterparts do for their religious and historical scenes. To the Chinese or the Japanese artist, the placement of a rock in a garden or in a painting touches upon the divine.

Then the poem over the landscape speaks of the metaphysical world of nature – the sound of wind and breeze and the fragrance in the air that hints at the promise of spring.

This ink painting of the orchids, done in 1982, is my favorite of the many that the monk has done and he did paint plants and flowers endlessly.

What I like most in this work is the clear display of his command of a process of painting called the ‘i-hua’ or ‘i-pi-hua’ (one stroke or the primordial lone). Each line of the leave is done at one go, making its turn and twist, pushing and lifting the right size brush with just the amount of ink for the journey.

The orchid flowers with their many petals are also done in this practised and elegant way and the calligraphy too. This is a faultless composition if ever there was one in his vast collection of artworks.

Finally, the most prodigious part of his artistic output is his calligraphy. He had a signature style with his brushwork to a point of abstraction.

To those in the know about Chinese written characters, his artworks are especially appealing and valued. Anyone could approach him when he was alive and actively painting to request for a number of written works, single or in pairs or within any combination. He was ever so happy to oblige.

Bo-Yeun’s artistic and spiritual contribution to Malaysia for most of his adult life is a great legacy for the country. We’ll somehow all miss his presence. But for those lucky ones who have known him and got one or more of his artworks, his ethereal presence will live on like the butterfly, flowers, mountains and streams in his art.