Joshua Brockbank catches up with one of Australia's first ordained Buddhist monks - with a West End connection, no less.

Adelaide, Australia -- On the edge of the hustle and bustle of a crowded cafe, one man distinctly stands out among the other patrons, looking a lot more relaxed than anyone else.  It’s not just the orange-brown robes that set him apart, but the way he sits there drinking his tea as if he has all the time in the world. 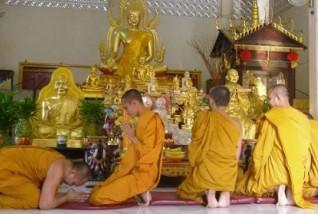 He goes by two names: Ajahn Joe or Dhammadaso Bhikkhu  They both refer to his status as a Theravadin Buddhist monk.  Theravada Buddhism is a particular branch of the Buddhist belief much the same as Anglican is to Christianity.  (Despite the South East Asian origins of his religion he admits he’s not too fond of the spicy food normally associated with that part of the world).

As one of the first westerners to be ordained as a monk in Victoria (second only to the man ahead of him on the day), he is partly responsible for establishing Brisbane’s first Thai Buddhist temple.  His Buddhist journey began 23 years ago when he was known as Norman Joseph Smith.

His flatmate encouraged him to have his horoscope read at the Thai Buddhist Temple in Melbourne (Wat Thai Nakorn), “I had nothing better to do so I thought why not?”  It was then he realised the minority religion wasn’t as satanic as his Christian up-bringing had led him to believe.  The impressionable 21 year old kept going back to visit the monks and developed a keen interest in meditation and 6 months later he was ordained.

A year later he and a Thai monk were sent to ‘scout’ temple opportunities in Brisbane, where the rest of Ajahn Joe’s family were living.  For the Theravadin Buddhist’s of Brisbane this was an exciting prospect and they were unanimously in favour of the idea.

So in 1987 the first Buddhist Temple in Brisbane (Wat Thai Buddharam) was established in the cramped basement of a school-wear shop in Highgate Hill, complete with toilet, sink and shower.  There the monks held teachings, blessings and meditation and “it got cramped very quickly”.   Within a few months word had spread so quickly among the Buddhist community that they could afford to rent a house in Chelmer.  By the early 90’s the Wat Thai Buddharam Temple was built on a block of land in Forestdale.

By then Ajahn Joe was travelling through Thailand, Burma, and Sri Lanka practising various forms of meditation in monasteries along the way.  He studied under a monk named Buddhadasa Bhikku (meaning slave-of-the-Buddha monk) who left a lasting impression on him and whose name partly inspired his own; Dhammadaso Bhikkhu means slave-of-the-Dhamma monk.  This was a three year journey that changed his understanding of the religion, “there’s a strong message to not just believe blindly because of tradition etc, you need to form your own theory and test it in your own life and that’s the ultimate authority”.  However this new approach didn’t conform to all the Theravadin values of his beloved Brisbane fellowship, and shortly after returning home he had to ‘disrobe’.

Although he had disrobed he stayed true to the meaning of his name, Dhamma translates into English as the ‘gradual unfolding of the truth taught by the Buddha’.  He spent the next fifteen years meditating and studying the teachings of Buddha, enrolling into a University of Queensland Bachelor of Arts course, majoring in Buddhist studies which he completed in 2004.

The culmination of Ajahn Joe’s spiritual study resulted in the publication of a book in 2005 called The Gift of the Buddha – a happy life in which the Dalai Lama wrote a forward.  Just over ten months ago he rejoined the monastery he helped establish, after realising the merit behind conforming to the Theravadin values he initially thought were unnecessary.

His knowledge of meditation has earned him respect among the other monks at the Brisbane temple - who have asked him to lead meditation classes, which he does every night of the week.  This year he began a Master of Arts majoring in Religious Studies at the University of Queensland, where he spends his time three days a week.

Retired TV technician David Warrington has known Ajahn Joe for four to five years, ever since he came to help Mr Warrington’s son use their computer, “I found Joe to be very bright, very polite and unassuming, and very good with a computer”.  It wasn’t too long before Ajahn Joe was also helping Mr Warrington on their computer as well, “he was so modest initially, that he was only charging some ridiculously low figure per hour, I had to insist that I pay him more.  I remember he had one of those collapsible scooters and he would travel for over an hour through the back streets with his ruck-sack” to get to their house.

Ajahn Joe lives in a small hut or ‘Kuti’ as he likes to call it, on the temple grounds - the first of several planned residences.  It’s in a secluded area away from the other buildings on the site and doesn’t have access to running water or electricity “which is fine for me” he says.    He is a man, who enjoys solitude and in retrospect the predominant reason he became monk is because he thinks “everyone is looking for happiness”, and as he walks off after our interview I feel a tinge of envy, he may not have many possessions, but that’s because he’s quite happy without them.