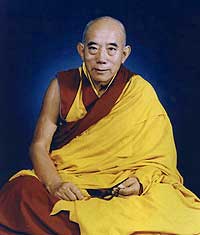 The renowned Rinpoche,  passed away peacefully in his residence unexpectedly with only slight stomach trouble as a symptom. He was not hospitalized.

It was reported that he had circumambulated His Holiness the Dalai Lama's temple just prior to his passing. Rinpoche's body is currently still warm and in a meditative state (bardo). His body will be brought back to Mundgod for his fire puja (cremation).

Lati Rinpoche was recognized as a reincarnation of a great practitioner and became a monk at the age of 10.

He was the Abbot Emeritus of Gaden Shartse Monastery in Mundgod, South India. Belonging to a very rare class of scholar, saint and high practitioner who completed his training in an independent Tibet, Rinpoche continued to spread the Dharma by teachings at various monasteries and schools, after he followed His Holiness the 14th Dalai Lama into exile in 1959. In 1964,

Rinpoche arrived in Dharamsala, and was subsequently appointed as Spiritual Advisor to His Holiness the 14th Dalai Lama. Rinpoche served His Holiness faithfully till today.

Rinpoche’s contribution towards teaching and spreading the Dharma was widely recognized by all, and  was deeply respected by many devotees all over the world.

His Eminence Kyabje Lati Rinpoche was born in the Kham region of Eastern Tibet in 1922. After the famous Gongkar Rinpoche (previous incarnation) identified and recognized Him as a reincarnation of a great practitioner, Rinpoche consequently embarked on the fulfillment of His destiny by joining the local monastery in Tibet - at the age of ten.

By fifteen years old, Rinpoche was enrolled in Gaden Shartse Norling College, located in central Tibet. It is the most prestigious and renowned school in Tibet, and it was at Gaden Shartse Norling College where Rinpoche pursued his study of Buddhist scriptures, and eventually, earning Him the highest honours among the foremost scholars of His day. At that time, Rinpoche?s field of study included Pramana Vidya (Logic), Prajnaparamita (Perfection of Wisdom), Madhyamika (Middle Philosophy), Abidharma (Treasure of Knowledge), Vinaya (Spiritual Rules and Moral Law).

In 1959, after nineteen years of intensive study and training, Rinpoche sat for the Geshe Lharmapa examination. This major examination was held in the summer palace of His Holiness the 14th Dalai Lama, located in the capital of Tibet, Lhasa. Candidates were various scholars and top students from the 3 main monasteries, and yet Rinpoche still managed to emerge 2nd overall. In the next year, H.E. was officially conferred as "Geshe Lharampa", a qualification which is equivalent to the PH.D. degree in the Indian universities. And in that same year, Rinpoche joined the tantric college in Lhasa, and started intensive study in Tantra since. In the following years, H.E. taught many young incarnate lamas, as well as gave dharma talks to the mass public. In 1964, Rinpoche arrived in Dharamsala, and was subsequently appointed as Spiritual Assistant to His Holiness the 14th Dalai Lama. Rinpoche serves His Holiness faithfully till today.

In 1976, under His Holiness?s suggestion, various universities in America invited Lati Rinpoche over, where H.E. gave illuminating dharma discourses to an appreciative public. In addition, Rinpoche taught at Namgyal Gomba (His Holiness?s personal monastery), at the debating college, and has guided and taught many laypeople as well. In the same year, Rinpoche was appointed as the Abbot of the Shartse Norling College of Gaden Monastery, in South India. H.E. held this position for eight years ? where besides looking after the administration, law and order of the Sangha, Rinpoche also personally taught extensively on all aspects of Buddhism. Rinpoche?s contribution towards Gaden Shartse Norling College is widely recognized by all, and H.E. is deeply respected by many strong devotees all over the world.

Since His retirement, Rinpoche dedicated His life mainly on dharma practice, as well as propagating the dharma, guiding people along the sometimes complex path of the dharma. On repeated requests from many countries in Europe and America, Rinpoche has travelled extensively, benefiting dharma students in various parts of the world.

To His credit, Lati Rinpoche has authored many important books on Tibetan Buddhism, including:

Dharma Teachings: Bliss and Emptiness in the Gelug Tradition by Lati Rinpoche
http://www.lamayeshe.com/index.php?sect=article&id=409