The lost world of Bhanodi Gompa: Discovered and now fading away

Chamba, India -- There’s an unusual silence up here at this place hidden from the world. It’s a one-man civilization, that of a lama - Bawa Sonam Gyatso - the last of Buddhist believers living here guarding the centuries-old Bhanodi Gompa tucked on one side of the Pir Panjal mountains separating mainland Chamba from the Pangi sub-division. It’s a world that has lived in isolation and is now dying in isolation. 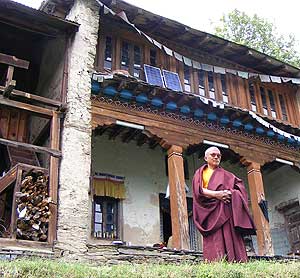 << Unknown to the travelers, hidden from the gypsies, forgotten from the travelogues, ignored in the history books, the Gompa at Bhanodi, district Chamba still stands and wait for a miracle.

While Buddhism has been flourishing in Himachal Pradesh for centuries, it has remained confined to areas adjoining Tibet including Lahaul & Spiti and Kinnaur and lately all areas except for Chamba, where its influence has been near negligible.

But Bhanodi has been an exception, with some folk tales even suggesting that Buddhism flourished here even before it entered Tibet. Ironically, the state tourism department, historians, researchers, trekkers and even the Tibetan community have remained ignorant about the historic Gompa, which, though a dilapidated roof shed today, is nevertheless a historic monument.

The irony has been that while the monument survived the vagaries of nature for centuries, winds of change has brought about a sudden threat to its existence. Bhanodi lies on the old route through which people going from Chamba to Pangi used to travel, and was thus an important trade link providing employment to the small Buddhist community living here.

When a new all-weather road was constructed to Pangi via Bairagarh village, people stopped taking this route, and therefore the Buddhists living here too moved out to places like Tissa, Chamba and Dharamshala. The only one left behind was Baba Sonam Gyatso, the Gompa caretaker. Even he has to migrate to Chamba during winters, which has recently also led to theft at the sacred place. With no financial aid coming, the Gompa is anyway crumbling under heavy snow each year.

While there is no recorded history of the place, folk lore has it that Bhikshus wandering in the Himalayas settled here finding the place conducive to their religious needs. Later 30 to 40 such families settled here and during winters they used to come down to Chamba and returned when the snow started melting. It is said that Raja Ram Singh of Chamba, who ascended the thrown in 1919 decided to visit Pangi and found the helmet of Bhanodi, where a good number of Khampa people used to perform Buddhist religious ceremonies. This aroused the interest of Raja Ram Singh and he acquired more information about them. The Guru of the monastery welcomed the Raja warmly and the Raja also took part in their religious ceremonies. At that time the temple was located in a small cave, and s new monastery was built on land granted by the king.

The Gompa was also visited by the first Chief Minister of Himachal Pradesh  Dr. Y.S. Parmar, whose photograph is still displayed proudly on the side walls of the Gompa, but the state  government forgot the place after that. A study of the Gompa architecture, the wood work and the few wall paintings left reveals that the artisians who build this monastery hailed from Laddakh or Tibet. In the sanctum is installed a stucco figure of Padmasambhva. Placed on a high pedestal, the statue reaches almost to the ceiling. The style and face of Padmasambhva suggest that it is one of its kind in the world.

Recently a society named District Padma Chhokharling Bodh Tibitan Association, Bhanodi, was formed to preserve the Gompa, but the remoteness of the place is still proving a hindrance as the Gompa is eight kilometers’ climb from the nearest road. Perhaps, the wise Lama may have foreseen a better future for the Gompa and thus stayed back.