The most entertaining way to recite the Heart Sutra.

Tokyo, Japan -- One of the most impressive things about Japan is the way the country seamlessly ties in centuries of old traditions with more modern everyday elements. We’ve seen this enticing blend of old and new in things like kimono dress shirts, izakaya restaurant bathhouses, and even Pokémon osechi New Year’s meals. 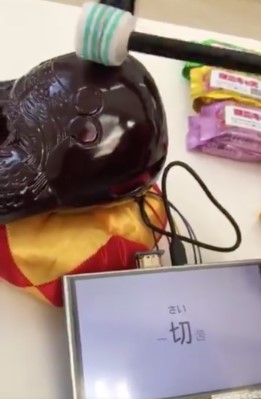 And now Japan’s Buddhist religion has just received a modern upgrade, with a new take on the traditional wooden fish. Known as “mokugyo” in Japanese, which literally translates to “wooden fish“, this traditional instrument is used as a temple drum in the Buddhist faith.

Monks and followers tap the fish with a mallet to create a meditative beat while reciting Buddhist texts, mantras, and sutras like the Heart Sutra. Often cited as one of the most important sutras in Mahayana Buddhism, the Heart Sutra contains words of wisdom that include:

When recited in Japanese, the sutra reads like a series of short syllables, and even dedicated practitioners sometimes have to resort to reading the text to ensure they don’t skip any parts.

But with one eye on the drum and one eye on the text, it can be difficult to keep reading as the sutra progresses. So one tech whiz in Japan decided to come up with a convenient solution, digitizing the process so each beat of the fish prompts the next word in the sutra to appear on a digital screen.

In the video above, you can see how easy it is to recite the Heart Sutra with each beat of the drum, as the display contains three kanji on the screen – the current kanji appears in extra-large font, and the last and next kanji in smaller font alongside it. To make things even easier, the kanji comes with its furigana reading on top, so people with limited Japanese ability can also try chanting the famous sutra.

According to @tokyo_ff, who posted this video, the prototype is ready to be made in small numbers, and there’s currently a call for Buddhist monks to try the item out during their daily rituals.
People everywhere were enamoured with the clever idea after seeing the clip, leaving comments like:

“If it had the whole sentence or phrase in there, it would be just like the displays you see
on karaoke machines!”
“My Buddhist monk friends knew how to recite this sutra by heart in high school, but I bet
they’d still love this.”
“This is like a techno Buddhist memorial service!”
“This makes me want to become a monk!”
“Please turn this into a smartphone app!”

We have to agree with that last comment there – this is definitely a great idea for a smartphone app and we hope someone releases it soon, preferably in a variety of languages so that we can all enjoy some meditative zen time. Until then, we’ll have to resign ourselves to gazing upon this cat in a zen garden for spiritual nourishment.
TOP