Gansu, China -- Thousands of Tibetan devotees converged this week in an open plain in northwestern China’s Gansu province for the start of a four-day period of advanced Buddhist rituals and teachings, sources in the region said. 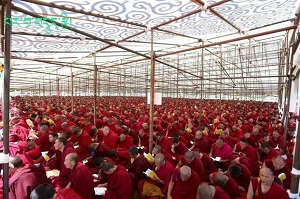 << Tibetan monks fill one of two large tents set up to hold ceremony participants in Gansu, June 7, 2016.
Photo sent by an RFA listener

“The preliminary teaching and instruction began on June 7, and the ceremony will go on for three days,” RFA’s source said, speaking on condition of anonymity.

Kalalchakra, which means “Wheel of Time,” is a ritual that prepares devotees to be reborn in Shambhala, a celestial kingdom which, it is said, will vanquish the forces of evil in a future cosmic battle.

The ceremony is frequently conducted outside Tibet by exiled spiritual leader the Dalai Lama, and government employees in Gansu were barred two years ago from taking part in a similarly large Kalachakra ritual, with warnings given of administrative punishment if they ignored the ban.

The organizers of this week’s event have made “excellent arrangements,” with large screens set up for participants to view and hear the proceedings from a distance, RFA’s source said.

“The main teaching is going on inside two huge white tents with thousands of monks and nuns in each tent, seated separately,” he said.

“Chinese devotees coming from other places have been given separate seating arrangements.”

Medical clinics and bathroom facilities have also been set up to accommodate the crowd, he said.

“Several hundred security officers have been deployed and are stationed at the edges of the crowd,” the source said.

“They are watching closely, but are not interfering in the religious activities,” he said.

Sporadic demonstrations challenging Chinese rule and calling for the Dalai Lama’s return have continued in Tibetan-populated areas of China since widespread protests swept the region in 2008.