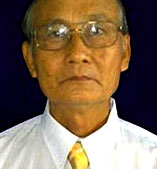 Nguyen Van Lia and Tran Hoai An were sentenced on charges of “abusing democratic freedoms to infringe upon the interests of the state,” state media reported Tuesday.

Lia, 71, denied the charges in the half-day trial, said his daughter, Nguyen Thi Ngoc Lua, who followed the trial via loud speakers outside the courtroom.

Officials at the People’s Court of Cho Moi District in southern An Giang province declined to comment.

An and Lia are members of the Hoa Hao Buddhist group. They were arrested in April after authorities found 15 books, 64 CDs and DVDs and 36 documents accusing the government of violating human rights and suppressing religious freedom, the official Vietnam News Agency reported Tuesday.

“One wonders what exactly the government of Vietnam is so afraid of that an elderly man like Nguyen Van Lia, who has dedicated his life to religion, should frighten them so much that they feel they need to lock him away in prison,” said Phil Robertson, deputy director of the group’s Asia Division.

Robertson said Lia, who is suffering from high blood pressure and several broken ribs, should be released and allowed to seek medical treatment.

Further information on An was not immediately available.

Vietnam does not tolerate challenges to its single-party rule.