Baton Rouge, Louisiana (USA) -- The chanting started off deep and guttural as nine Tibetan monks began the opening ceremony Monday for the construction of a mandala sand painting at the Tam Bao Meditation Center in Baton Rouge. 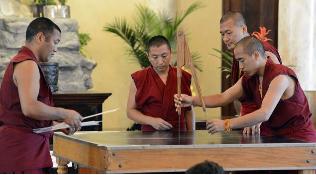 With their eyes closed, the chant blended into a song punctuated by music of drums, horns and hand bells.

Lobsang Dhondup, a Tibetan monk, said creating a mandala, which is an ancient art form of Tibetan Buddhism, requires rituals, prayers and meditation. These, he said, ensure a friendly environment for the creation of this sacred art.

The monks, who are traveling with the Dalai Lama, came to Baton Rouge to create the mandala over the next four days. People are welcome to come and watch construction of the mandala from 9 a.m. to 5 p.m. the rest of the week.

Visitors also can participate in an evening talk starting at 7:30 p.m. each night.

On Friday night, there is a suggested donation of $20 per person and $15 for college students if the person is able. The proceeds will go to the Tibetan monks to support their practice and expenses.

Kim Lee, 30, brought her niece Isabella Lee, 5, to the opening ceremony Monday after having heard the Dalai Lama speak Saturday in New Orleans.

Her cousins helped build the temple that sits on a small piece of land just north of Airline Highway, she said, and her family supports the temple.

"It was interesting. Totally different culture", Kim Lee said of the opening ceremony.

Thay Dao Quang, Abbot of Tam Bao Meditation Center, said he was happy when the monks asked to come to Baton Rouge not only because of the mandala they would create, but also to let the Baton Rouge Buddhist community learn from other outlooks.

He explained there are many variations of Buddhism, so Tibetan Buddhism is different from Vietnamese Buddhism. In fact, he said, Buddhism practices differ in the south, center and north of the country.

"However, the foundation is the same," Quang said.

As the monks started using string and a large wooden compass to lay out the design of the mandala, Sue Ann Conerly, 68, of Greenwell Springs, watched from the side of the room.

Although she had never been to the Tam Bao Meditation Center before, she said she drives by it often on her way to and from home. She saw a notice about the opening ceremony in the newspaper and was interested in checking it out.

"Very, very interesting," Conerly said after the opening ceremony." "I don't know too much about it other than peace. love and tranquility."

She said she planned to come back for some of the lectures throughout the week.

Like many of those who attended the opening ceremony, Cathy Coates, of Baton Rouge, had been to hear the Dalai Lama's speak in New Orleans. She said she knew her mother, who is an avid photographer, would love to hear and see the opening ceremony so she brought her along to the meditation center.

"I've been to Tibet and how often do you get to see Tibetan monks in Baton Rouge?" Coates said.

"We were able to go to the closing ceremony," Charlotte Lachicotte said. The closing ceremony is when the sand mandala is destroyed and all the sand scooped up. In New Orleans, the crowd then made a procession to the Mississippi River, where the sand was poured into the water.

"And that's the peace to be spread over the whole world," Frank Lachicotte explained.

They attended the opening mandala ceremony in Baton Rouge because they wanted to see the process begin since they'd seen the closing ceremony a few days ago, Charlotte Lachicotte said.

"We couldn't get enough," she said.

The Tibetan monks will stay through Saturday when the center will be celebrating the Buddha's birthday.